Shares of PDL BioPharma hit a 52-week high on Wednesday. Let's take a look at how it got there and see if clear skies are still in the forecast.

How it got here
With the spinoff of Facet Biotech in late 2008, royalties are the name of the game for PDL BioPharma and the primary reason why it's heading to new highs. PDL owns royalty rights for many high-profile drugs, including Roche's (OTC: RHHBY) Herceptin and Avastin, Novartis' Lucentis and Xolair, and Biogen Idec and Elan's multiple sclerosis drug, Tysabri. PDL receives a tiered payment on Herceptin and Avastin within the U.S. and a flat 3% royalty on sales outside the United States. PDL's royalties are similar for its remaining drugs, representing a flat percentage of total sales.

Simply put, this means sales growth in these underlying drugs will mean more royalty revenue for PDL. Through the first six months of 2012, PDL generated $203 million in royalty revenue, with age-related macular degeneration treatment Lucentis leading the charge with 15% growth. Xolair and Tysabri chipped in with 13% sales growth each, while Herceptin logged 4% sales growth. Avastin sales represented the stinker of the group, with sales up just 1% year-over-year. Avastin sales suffered due to the withdrawal of the drug for metastatic breast cancer indications in the U.S. and pricing pressures in Europe.

How it stacks up
Under normal circumstances this is where we'd compare PDL versus other companies, but PDL really only has one enemy -- patent expirations! 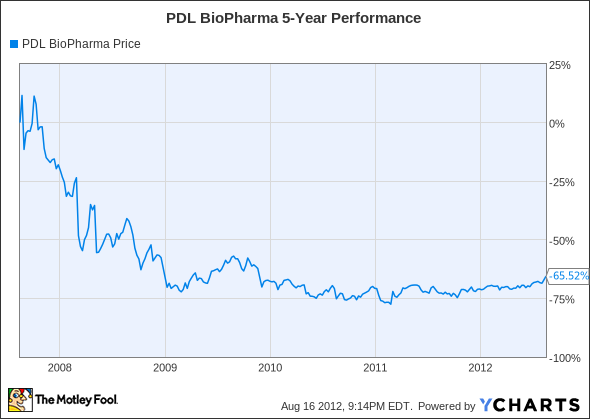 PDL's past five years haven't exactly been the prettiest thing to look at from a shareholder's perspective. As the Fool's Rich Duprey noted earlier this week, the risk associated with owning PDL has to do with a certain patent PDL holds over the drugs mentioned earlier, which expired in 2009. Only through supplementary protection certificates issued by various European countries was PDL able to maintain its royalties in Europe. Many of these supplementary protection certificates are scheduled to expire by 2014 and could provide a sizable dent in PDL's royalty stream.

As for PDL's portfolio of drugs within the United States, many of the patents protecting these drugs are not set to expire until 2017 (or later, in some cases), and the global addition of Roche's metastatic breast cancer treatment, Perjeta, to its royalty portfolio is expected to only increase its cash stream.

What's next
Now for the $64,000 question: What's next for PDL BioPharma? The answer depends entirely on what happens with PDL's supplementary protection certificates in Europe in 2014, and if the company can continue to forge deals with leading pharmaceutical companies to increase its revenue stream and support its impressive 8.2% dividend yield.

Our very own CAPS community gives the company a four-star rating (out of five), with 95.1% of members expecting it to outperform. Although I've yet to make a CAPScall on PDL BioPharma as of yet, I'm going to change that now by entering a CAPScall limit order of outperform at $7, roughly 5% below yesterday's closing price.

There's really a lot to like about PDL, including its diverse profile of drugs generating royalty revenue complete with high-profile dedicated marketing teams in Roche, Novartis, Elan, and Biogen Idec. Also, Roche's Perjeta could see peak sales of $1 billion according to analysts, so that could mean a nice boost in PDL's future revenue stream. Even with worries about its supplementary protection certificates expiring in Europe, the market has pretty well factored in these worries by placing PDL at just a forward P/E of four. Tack on an 8.5% yield and you have the makings of a long-term winner for income investors. The only reason I wouldn't give the company an outperform rating this moment is merely the vertical run-up PDL's share price has undergone over the past few days.

Peter Lynch has always inspired investors to buy what they know and buy businesses they can easily understand. PDL BioPharma and its easily laid-out royalty revenue stream is one example of that. Our analysts at Motley Fool Stock Advisor couldn't agree more, and recently released a report highlighting three stocks that middle-class investors like you and I, who don't have Warren Buffett-type cash in our pockets, can use to get rich. See what companies they've highlighted, for free, by clicking here.