GT Advanced Technologies has to be one of the most interesting stocks on the market just because the stock seems to move wildly on the whim of the market. When solar stocks were hot in 2010 the stock rose, but when solar stocks fell out of favor so did GT Advanced Technologies. Few paid attention to the fact that the company's financial results didn't suffer at the time that solar margins were plummeting; to the contrary, the company's financials only improved.

Earlier this summer I decided to take a step back and evaluate the company from a new perspective. The stock was trading at $4.12 the day I published the article "A Fresh Look at GT Advanced Technologies" and the stock traded at less than double cash on hand and only 2.8 times trailing earnings. I concluded that the stock was a great buy considering the fundamental value and that the market simply didn't understand the company's future markets well enough.

It turns out that the buy thesis was right but the company hasn't announced really anything significant enough to cause the stock to rise 50% since then. Earnings were OK, not great, and the company simply reiterated its 2012 earnings projection of $1.30 to $1.40 per share. So what's really changed?

What's interesting is that two other undervalued companies in the solar market are feeling the market's love once again, too. Power-One and First Solar have both been strong stocks from a fundamental perspective, good earnings with strong balance sheets, but their stocks had been pounded until early summer. 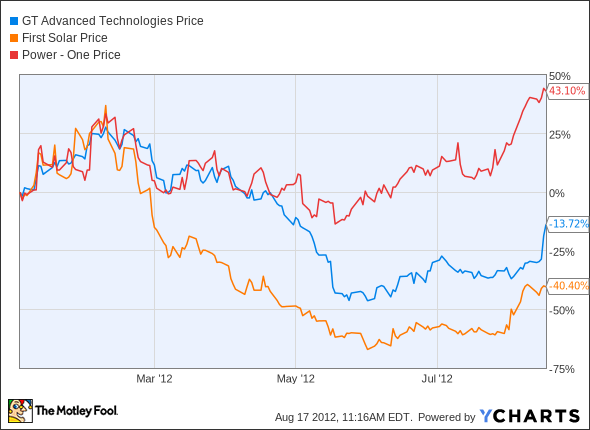 But once the summer's heat hit, something changed. First Solar and Power-One both reported second-quarter earnings that crushed expectations and suddenly their values became attractive. Add to that a strong report from the solar industry's other powerhouse, SunPower , and you suddenly have the market seeing an industry that's performing better than expected with upside galore.

The first thing that makes me believe the pop is sustainable for Power-One, GT Advanced Technologies, and First Solar, in particular, is their balance sheets. Having cash on hand is a great protection from downside for investors but it is particularly important for installers who are deciding which manufacturer to use for their installations. Both First Solar and SunPower pointed to this as a major advantage over Chinese competitors in the most recent quarter and I think the trend will continue.

The second factor I'm looking at is the sustainability of solar in the marketplace overall. First Solar's strategy shift to utility-scale projects in nonsubsidized markets, SunPower's focus on residential solar's cost effectiveness, and GT's emerging HiCz technology that will make solar even more efficient and cost effective are strong signs for solar. Power-One will benefit as these markets mature and their product is pulled through.

Finally, we've seen a lot of companies leaving the solar market, which may seem like a bad sign, but it's actually good for strong manufacturers. Each of these companies has a differentiated product and is profitable in a competitive market. Compare that even to an emerging company like Enphase , which has taken the world by storm but still isn't profitable. Those who can't make a profit will slowly fall by the wayside, leaving a bigger piece of the pie for the survivors, and I think that's one of the reasons Power-One, First Solar, GT Advanced Technologies, and even SunPower have performed well recently.

Solar still has a long haul ahead, but the fundamentals of the industry are only improving and the companies that survive have a huge opportunity. To see just how big the opportunity is for First Solar check out our detailed report on the company. It comes with a year of free updates so you can stay current on this fast changing-industry. It can only be found here.