Welcome to "Stock Smackdown," where two of your favorite stocks go head to head in a battle for superiority. They'll each be judged on a series of objective merits, including valuation, earnings quality, and dividend quality. We'll also take a look ahead at some more subjective measures -- Wall Street's analysts will get their say, but so will The Motley Fool's top market minds.

The winner will be the stock that racks up the most points at the end of their competition. Let's go ringside and meet our two combatants, ExxonMobil and BP .

In this corner …
Do you crave consistency, or are you looking for a turnaround story that can put some extra oomph in your gains? ExxonMobil's the oil industry's reigning monarch, the largest publicly traded, fully integrated oil company in the world. That lordly standing has led its stock to diverge from BP's quite markedly since 2006, particularly in the aftermath of the Deepwater Horizon disaster that sent the British oil giant's shares plunging: 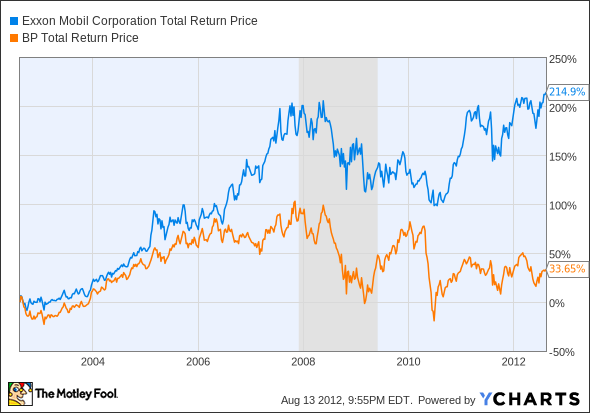 BP, on the other hand, has been reeling ever since the 2010 rig explosion heard round the world. The company's ongoing court battles with Deepwater Horizon partners Transocean and Halliburton have not gone its way. BP paid nearly $1 billion to Transocean this past quarter to settle accident claims, and Transocean and Halliburton have long since been freed from any additional liability. Continued uncertainty over Deepwater Horizon's long-term impact has kept BP's valuation low, but investors may take solace from ExxonMobil's highly successful recovery from the Alaskan Valdez disaster.

Will the reeling contender get knocked down for the count? Does BP have the appealing metrics necessary to fight back against ExxonMobil's consistent dominance? Let's find out.

Valuation battle
We use many different numbers and ratios when talking about the value of a stock. The price-to-earnings ratio is the standard, so we'll check each company's current P/E and five-year historical average P/E. We'll also use price-to-free cash flow today. Earnings can be gamed with a number of different accounting tricks, but free cash flow is harder to manipulate, making it a favored metric here at the Fool.

In each case, the difference between a stock's current ratio and its five-year average ratio will be more important than the numbers themselves. Stocks trading significantly lower than their average ratios may have more room to return to that middle ground.

For the tiebreaker, we'll check one less-used financial metric: the debt-to-equity ratio. A company with little or no debt is usually in better shape than one leveraged to its eyeballs.

It looks like BP takes this round, thanks to the market's hefty discounting of its shares on a free cash flow basis. How will it fare when it comes to earnings quality? Let's find out.

Earnings-quality battle
A company can be cheaply valued without being a good value. To balance out our valuation fight, let's look at a few key earnings statistics for each company. We'll look at gross and net margins, a five-year annualized rate of earnings growth, and consecutive years of both positive earnings and earnings growth since 1992, two decades ago. A company with no momentum today is less likely to become a superstar later -- it has happened before, but not often.

It's a clean sweep! ExxonMobil takes the earnings quality crown, as BP's ongoing legal trouble continues to produce weak numbers. Can BP fight back in the dividend battle ahead?

Dividend battle
A growing company is great, but one that pays you back is even better. Let's see how strong and stable each company's dividends really are. We'll examine yield and two payout ratios, both the standard net income-based ratio and the free cash flow payout ratios. We'll also examine each company's five-year annualized dividend growth rate, and each company's current streak of uninterrupted payments.

Those payout ratios are important, particularly the free cash flow payout ratio. Companies that pay out more than they take in can rarely sustain such practices for long.

Sources: Morningstar and Dividata. Winners in bold.
NM = not material because of negative results.

ExxonMobil is the clear dividend champion. Can it survive the final rounds?

Battle for the future
Looking at the past is well and good, but let's go further. How do the world's most engaged market participants view these companies? Let's see what Wall Street's analysts expect from these companies, and what our Motley Fool CAPS community thinks.

After four rounds, it looks like ExxonMobil has taken this battle. Both companies should reward long-term shareholders, but ExxonMobil's relative lack of major earnings drags looks to keep it on top for the time being.

ExxonMobil's earned many plaudits from Foolish analysts as well. It was one of this year's Dow Smackdown finalists, narrowly losing to Caterpillar in the end. It was also one of the five cheapest stocks on the market, according to my Foolish colleague Matt Koppenheffer's total enterprise value-to-EBITDA calculations. On the other hand, Fool energy gurus Aimee Duffy and David Lee Smith both prefer Chevron when it comes to oil majors. They may be right -- but we'll have to examine that claim in the future. Today, ExxonMobil's the winner of our Stock Smackdown.

ExxonMobil's dividend is rock-solid, making it part of an elite group the Fool thinks will secure your future. There are nine stocks on this top-tier list, and we're offering you the inside scoop at no cost for a limited time. Start building stronger foundations for your portfolio today -- get the free information you need now.