Escaping the clutches of a strong undertow can be as much about selecting the right direction as it is about the strength of one's stroke.

Shareholders of Pan American Silver continue to gasp for breath after a torrent of unfortunate developments has dragged the stock to unspeakable depths of weakness. To escape this powerful undertow and reverse the tide of a deteriorating market capitalization, Pan American has opted to swim in a different direction.

The deep dip
The company is holding firm to an explicit intention to sideline its massive Navidad development project until or unless Argentina's Chubut province drops a set of onerous demands proposed as a condition of regulatory approval to construct the mine. Under a distinct set of circumstances, Pan American also walked away from the La Preciosa joint venture with Orko Silver (NASDAQOTH: OKOFF.PK) after determining that the project was "unlikely to generate a rate of return" that would satisfy the company's project selection criteria. Given the confidence that Pan American had previously expressed in La Preciosa, that move came as a complete surprise to this Fool.

In the aftermath of those two unfortunate developments, and an undeniably rough trailing year for silver stocks in general, let's examine how Pan American's dastardly performance stacks up against the competition over the past year: 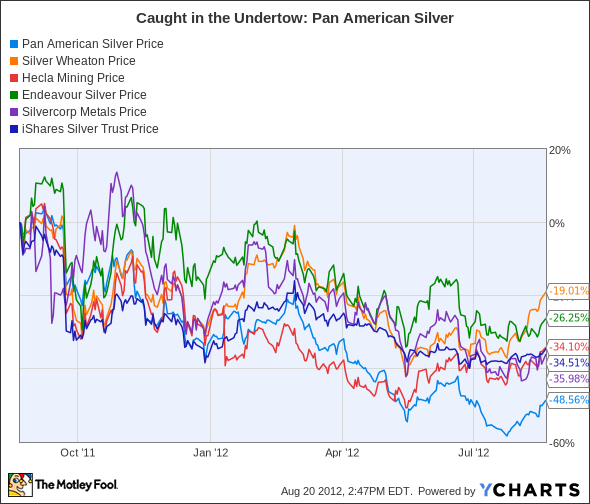 As a cascading silver price dragged the iShares Silver Trust lower by 35% over the trailing year, Pan American Silver's 49% drop provides a disappointing counterpoint to the noteworthy resilience of outperformers Silver Wheaton and Endeavour Silver .

Charting a new course forward
With two previously charted avenues for meaningful production growth now shelved, Pan American has peered deep inside its impressive asset portfolio to arrange a revised set of development priorities. Among the remaining growth opportunities, the most glaring no-brainer involves the addition of a milling facility and underground mining operation to the recently acquired Dolores mine. Prior operator Minefinders identified the potential to increase production from about 3.6 million ounces of silver per year to target 7 million ounces (plus substantial gold by-product production) through a low-cost expansion project, and under the circumstances I expect Pan American to follow through aggressively with a similar expansion plan.

Meanwhile, Pan American spoke favorably within an exploration update last week about the prospects for its Waterloo project in California. As the company works to confirm a historical resource of 101 million ounces of silver at an average grade of 93 grams per ton, recently encountered intercepts like a 108-meter interval grading 181 grams per ton have piqued this Fool's interest.

Between the substantial opportunities for organic production growth from assets like Dolores, the still-expanding La Colorada mine, and the Waterloo project that is "well on its way to being Pan American's newest development project," I suspect that investors with the stamina to outlast the recent undertow are likely to emerge from an investment in Pan American Silver with their heads above water. The company retains nearly $520 million in cash and short-term investments (equivalent to $3.38 per share!), and total debt beneath $76 million. With the important caveat that I perceived a deep bargain valuation when the stock stood more than 50% above its current price, I think Pan American Silver continues to warrant the interest of disciplined value investors. While it's no longer a top pick with Navidad out of the picture for now, I fully expect my bullish CAPScall on the stock from 2007 to move back into positive territory as this silver bull market resumes in earnest.

Pan American Silver isn't the only mining company that could surge. The Motley Fool has another stock with the potential to return sizable profits to investors. Download The Motley Fool's special free report "The Tiny Gold Stock Digging Up Massive Profits." Our analysts have uncovered a little-known gold miner that we believe is poised for greatness; find out which company it is and why we strongly believe in its future -- for free!