Shares of eBay hit a 52-week high on Monday. Let’s take a look at how it got there, and see if clear skies are still in the forecast.

How it got here
Please keep your arms and legs inside the car while the vehicle is in motion. Online auction and payments company eBay has found its groove again, and it looks ready to take investors for quite a profitable ride.

In its second-quarter results reported last month, eBay recorded a 23% rise in sales, as profits climbed 16%. Despite slowing growth in Asia and a spending slowdown in Europe, eBay managed to rapidly grow its online marketplace business during the quarter. This was due to many quarters of site improvements, which are making it easier to navigate the site,  and more seller-friendly. Gross merchandise volume grew by 14% in the U.S. during the quarter, to $6.24 billion (excluding auto sales), easily surpassing Wall Street’s expectations, and jumped 8%, to $9.93 billion, internationally.

The really exciting potential, however, lies with eBay’s expansion into mobile platforms, and the possibilities for growth with PayPal. Total PayPal accounts jumped 13% during the second-quarter to 113.2 million.

But, not even socially diverse companies like eBay come without their own set of concerns. The possibility of taxing online sales has been a concern for some time for both eBay and its online marketplace rival, Amazon.com . The  benefit of not paying taxes with online purchases is what drives such strong online marketplace growth.

Also, competition among mobile payments operators is increasing and threatening to unseat PayPal as the dominant party. Privately-held Square recently struck a deal to be the credit and debit transaction processor of choice for Starbucks , pushing on PayPal to innovate rapidly. eBay and PayPal have responded by orchestrating a potential blockbuster deal with McDonald’s . As of now, PayPal is testing the mobile payment concept in 30 McDonald’s stores in France.

How it stacks up
Let’s see how eBay stacks up next to its peers. 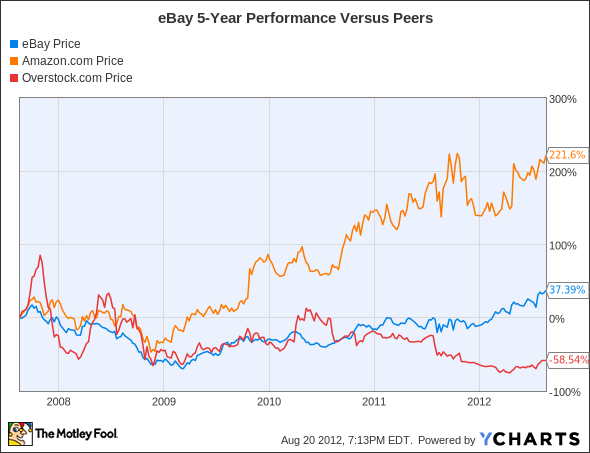 As you can see, eBay and Amazon’s performance prove that success in the online marketplace isn’t easy …  just ask Overstock.com shareholders.

What we have here is a two-way race between eBay and Amazon, with the two companies taking very different paths to mobile and social media success. eBay is banking on its mobile payment system PayPal to catch on with large businesses, and be the premier growth driver over the next decade. Amazon, which has chosen to fully invest its earnings back into its network, has expanded outside of its traditional marketplace offerings (books and electronics), and has focused more towards providing digital content and enterprise cloud services. Both paths seem likely to succeed, but the metrics here paint a very different picture about these two companies.

Overstock, on the other hand, continues to put the "O" in "overvalued.”  Its second-quarter results showed vast improvement over the previous year, but it continues to see weak traffic. It just can’t compete with the likes of eBay or Amazon.

What’s next?
Now for the $64,000 question: What’s next for eBay? That question depends on how effectively it monetizes its mobile marketplace users, if it can secure big contracts for PayPal while fending off Square and other competitors, and if government regulators decide to tax online transactions.

Our very own CAPS community gives the company a four-star rating (out of five), with 86.7% of members expecting it to outperform. Feel free to count me among the majority, as my CAPScall of outperform is up a clean 30 points since my call.

Like Amazon, eBay is in the sweet spot of the mobile revolution. PayPal is the premier name for online payments now and, given its generally strong track record, there’s little reason to believe it won’t be a preferred choice when retailers begin to include mobile platforms within their stores. eBay’s investments in its online marketplace are also finally beginning to reap solid rewards. Its double-digit merchandise volume growth in the U.S., in spite of weak consumer spending, is a testament to this. As long as online taxation of marketplace sales remains off the table, eBay will remain a strong buy.

There’s nothing that excites our technology analysts more than discovering companies that are ripe to benefit from new and disruptive products. That’s why, in our latest special report, our analysts have highlighted three stocks that t hey feel are ready to reap the rewards of the next Industrial Revolution in technology. Click here to get your copy and find out their identity for free!

Craving more input on eBay? Start by adding it to your free and personalized watchlist. It's a free service from The Motley Fool to keep you up to date on the stocks you care about most.