Shares of Hewlett-Packard hit a 52-week low today. Let's look at how it got here, and whether the iconic PC maker has more dark days ahead.

How it got here
HP’s closest competitor, Dell , similarly hit a new low of its own recently. Both companies are feeling the squeeze of the commoditized PC business, while the overall PC market continues to stagnate. Many companies within the supply chain are hoping that Microsoft Windows 8 will turn the tide, but there’s still a lot of uncertainty there. That’s why both companies have been trying to aggressively expand into IT software and services.

Unlike Dell, and more like Microsoft, HP just had to eat a massive $10.8 billion in various write-downs, mostly related to its acquisition of Electronic Data Systems. The most troubling fact about the impairment was that the acquisition was one of HP’s biggest, and most expensive, moves into IT services, so the write-down tosses some cold water onto its Big Blue dreams.

How it stacks up
Let’s see how HP stacks up with its peers. 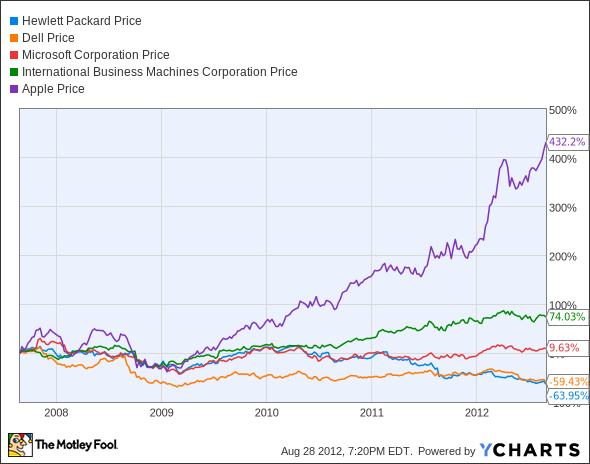 We’ll look at some fundamental metrics, as well.

HP and Dell remain mostly in the same boat, except that Dell isn’t swallowing as much of its pride with impairments. Microsoft enjoys higher margins on the software side than HP and Dell see on their hardware-centric businesses. HP looks on enviously at IBM’s digits, and how much greener the grass is on the IT services side, if it can get there. Apple enjoys the best of both worlds, riding hardware and software integration and innovation to even higher margins than Microsoft.

What’s next?
Windows 8 is due out in a matter of months, giving HP an important entry into the tablet market, after it first failed so spectacularly. CEO Meg Whitman is doing her best to turn this ship around, but it’s a big ship.

The Motley Fool has just launched brand new premium ticker reports at non-premium prices that lay out everything investors need to know about specific companies. Make sure to grab the report on Microsoft, and the report on Apple, today. Sign up today and get regular updates at no additional cost!