Shares of Caesars Entertainment hit a 52-week low yesterday. Let's look at how it got here and whether clouds are ahead.

How it got here
What a disaster Caesars Entertainment has been as a public company. After its high-flying February IPO, the stock has declined steadily. But don't say we didn't warn you this was coming. The day of the IPO, I warned of dark clouds coming because the company's debt was an anchor the company just wouldn't be able to shed.

When the company reported second-quarter earnings, the problems for Caesars became crystal-clear. Revenue and EBITDA fell in all but one of the company's operating regions, and the company added more debt to the balance sheet.

Since the IPO, gaming stocks haven't done well, but Caesars has lagged behind the competition. Wynn Resorts and Las Vegas Sands , which are more focused in Asia than the U.S., have led the way, but MGM Resorts has had similar problems to Caesars. 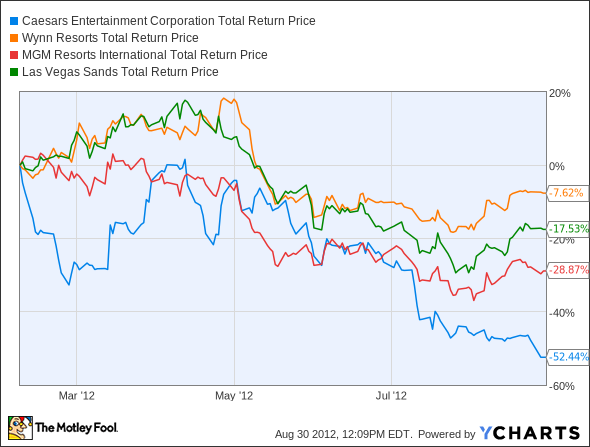 The fundamentals show exactly why Wynn and Sands are outperforming rivals. They will both post a profit this year while Caesars and MGM are expected to post significant losses.

Caesars is expected to lose nearly its entire market cap this year, and I'm not sure how long the losses can pile up.

What's next?
Bankruptcy isn't around the corner because management has pushed out debt maturities, but I see no reason the company will be in better shape in a year. The company's markets are floundering, and there is absolutely no way the company can easily maintain its debt load without significant growth.

I'm not the only one who's bearish on the stock. Fifty CAPS members have given the stock a thumbs-down versus just 13 outperform calls, resulting in our lowest one-star rating. There's just not much positive to point to for Caesars, and I would walk away.

Interested in reading more about Caesars Entertainment? Click here to add it to My Watchlist, and My Watchlist will find all of our Foolish analysis on this stock.