Here at The Motley Fool we believe you don't need to be a rocket scientist or grossly overpaid financial professional in order to beat the market. All you need is a little time, patience and a few Foolish friends to help lead you down the most profitable path. In an effort to do my part, I will be regularly comparing companies against the market itself -- or in this case, the S&P 500. We will first look at the past price performance, then a few current key metrics in order to make our investment decision.

Today, we will be looking at whether Wal-Mart has what it takes to beat the market.

Past
First, let's examine how Wal-Mart has performed over the past year. 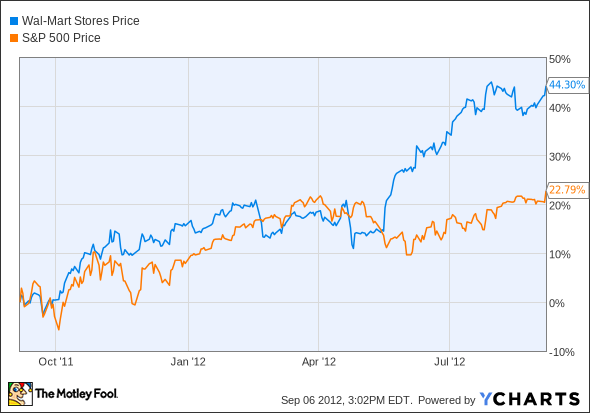 Wal-Mart has easily beaten the market, more than doubling the returns of the S&P 500. Now we'll review the price performance over a longer period of time. 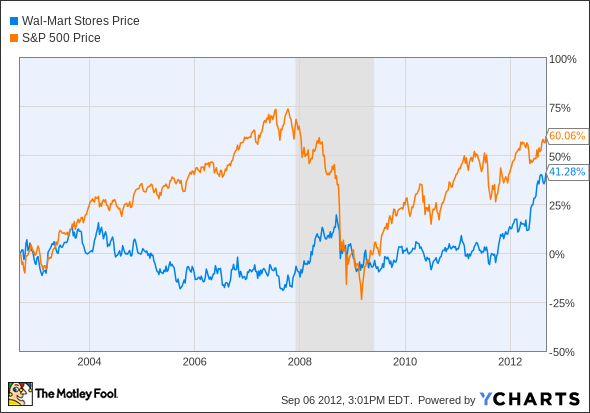 Over a 10-year period, Wal-Mart has been outperformed by the market. Even after taking a hit during the recession, the broader S&P 500 index rebounded more strongly than Wal-Mart in the aftermath. On the whole, the market beat out Wal-Mart when looking at the last decade in isolation.

Present
While it is very important to know about the past, current metrics will give us the best indication of whether or not we have found a future market-beating stock. In order for that to happen, it will need to beat the S&P 500 in these four areas:

Even though the S&P 500 is crushing Wal-Mart in profit margins, the index is losing in the battle of P/E, dividend yield, and ROE. Furthermore, while the market has beat Wal-Mart over the past 10 years, the retail king easily outperformed the S&P over the past year and should continue this trend if management can keep ROE high. In addition, having a low P/E also indicates that Wal-Mart could move higher without becoming overly priced if earnings are flat.

Lastly, while net margins look low compared to the market, Wal-Mart actually maintains average margins in the discount variety stores sector, which boast net margin of only 3.7%. What is more promising about Wal-Mart is that it's currently testing a new "Scan and Go" checkout system. This program could speed up checkout times, resulting in lower payroll costs. Supermarket giant SUPERVALU , which boasts net margins of -3.02%, has actually decided to cut its own self-checkout system from the Albertsons grocery chain, due to negative issues arising from the program.

Foolish investment decision
Even though over the past 10 years the market has beaten Wal-Mart, I believe the company Sam Walton founded nearly a half-century ago will win that battle during the next 10 years. I have also given Wal-Mart a thumbs-up CAPS Call in order to "put my money where my mouth is." Now whether or not Wal-Mart can top Target's numbers is an article for another day. But our analysts have found a retailer they believe shows great potential in the coming years. Check out this free report today.