The iPhone 5 launch on Wednesday, Sept. 12 is sure to be the most important event for tech investors this year. The Motley Fool will be hosting a live chat where our top tech analysts will answer your questions and break down what the announcement means for Apple and tech investors everywhere. Be sure to swing by Fool.com at 12:45 p.m. EDT this Wednesday for all your coverage of Apple's next big announcement.

Shares of LinkedIn hit a 52-week high last week. Let's look at what's driving these gains to understand what lies over the horizon. Are there clear skies ahead?

How it got here
It's been hard out there in the job market lately. Sure, the unemployment rate's down, but that number comes with caveats. Not every job-seeker is finding work, and many employment sites have fallen on hard times. Not LinkedIn, though -- it's outperformed job-hunt competitors Monster Worldwide and Dice Holdings , but it's also doing better than staffing agency Robert Half , despite the fact that Robert Half has grown its bottom line at a much faster clip. 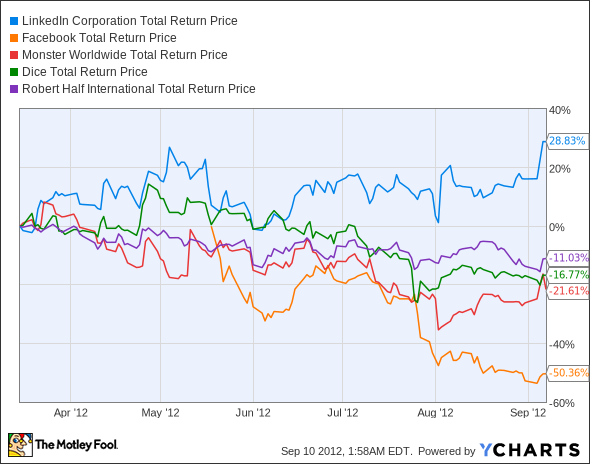 LinkedIn's also a bright spot in the moribund social-media sector, which has been in a bit of a funk thanks to Facebook's post-IPO slide. Facebook could still develop a LinkedIn of its own, but at this point it's a lot cheaper than the premium-plus LinkedIn, which sports eye-popping valuations thanks to booming revenue growth that hasn't been matched by bottom-line gains.

Can those valuations hold up, or will this high be the last for a while? Let's find out by looking at a few key numbers.

What you need to know
In order to drill down past the P/E ratio, I compared these stocks on a free cash flow basis. That improves LinkedIn's standing, but not by much -- its ratio on that measure is still many times higher than other employment-assistance stocks:

That growth rate will need eventually to bring about a higher net margin as well as improved top-line results. The only remotely comparable company in this regard is Monster Worldwide, and since that company ought to see just under half of LinkedIn's projected growth for next year, the gap may not shrink all that much. LinkedIn's driving its revenue growth with a lot of extra sales and marketing, but more sales boots on the ground puts LinkedIn in closer competition with Robert Half, since LinkedIn customers might have otherwise retained Robert Half's recruitment services.

Since it began reporting earnings, LinkedIn's actually posted the weakest earnings growth of the four employment companies on this list. 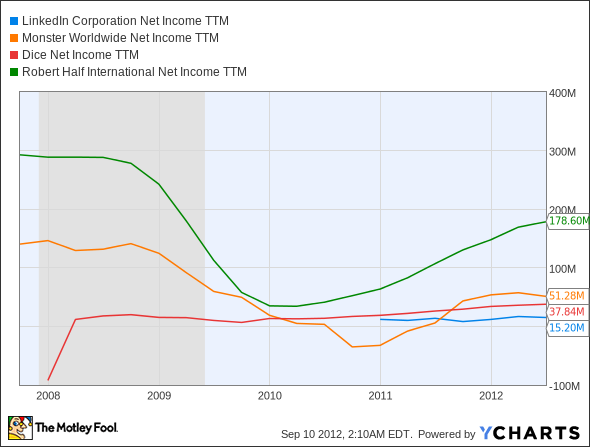 The problem with this statement is that none of LinkedIn's competitors have done very well at recovering to pre-recession levels, so this growth has largely been part of that effort, rather than part of a long-term trend. Analysts and investors have all but written off LinkedIn's competitors and have chosen instead to focus on the upstart with the limited (but primarily positive) history.

LinkedIn also does a better job monetizing its users than Facebook, but with nearly 10 times the user base, Facebook can reap outsized gains from any small boost in its average revenue per user. LinkedIn holds one key advantage over Facebook, however -- less publicity. Being Facebook's well-dressed but boring cousin is to LinkedIn's advantage, as it's yet to endure anything close to the withering critique of its financial statements that Facebook's experienced since its S-1 filing this spring.

What's next?
Where does LinkedIn go from here? In my humble opinion, it's going to take some serious margin expansion to justify LinkedIn's eye-popping valuation. The Motley Fool's CAPS community agrees, as they've awarded LinkedIn a one-star rating. Only 26% of our CAPS players expect the company to keep beating the indexes going forward. That's a more bearish rating than Facebook earns -- 46% of our CAPS players give it an outperform rating.

Interested in tracking this stock as it continues on its path? Add LinkedIn to your Watchlist now, for all the news we Fools can find, delivered to your inbox as it happens. If you think Facebook might be a better bargain today -- or if you'd rather keep a close eye on a potential LinkedIn competitor -- then you need the Fool's premium research service. A subscription comes with one full year of regular updates and detailed analysis on Facebook's future. Sign up today for the information you need.