If you've been even remotely following the fiasco that's been Facebook's (NASDAQ:FB) short life in the public fast lane, then you're well attuned to the fact that the social networker makes little to no money on mobile as of yet.

Of course, Mark Zuckerberg is also even more aware of that reality, but remains confident that Facebook will be able to successfully monetize mobile usage of its service.

Starting in March of this year, Facebook began rolling out Sponsored Stories throughout the news feeds on its mobile apps as the first step toward monetizing its popular app. Through the first half of the year, this only brought in a "small portion" of revenue. On the conference call, Zuckerberg said that by the end of June, mobile was generating a run rate of approximately $500,000 per day, and that social ads perform better than nonsocial ads.

Source: Because Zuck Dawg says so. Deal with it.

This makes sense, and is why Facebook has such a unique place in the ad market as the largest social network ever known to man. COO Sheryl Sandberg called it "word-of-mouth marketing at an unprecedented scale." After all, if one of my closest friends or family members "likes" a brand page, I'm much more open to considering it than if I'm being pitched purely at random, much like the annoying display ads on how to get killer abs it used to display on the side panel on its site.

Those ads had notoriously low click-through rates because -- let's face it -- that six pack will never materialize based on how many times you click through. Trust me, I tried:

Social advantage: Facebook
That's also why Google's (NASDAQ:GOOGL) click-through rates on search ads are so superior, since when you go to the search engine to look for something, it knows exactly what you're looking for and can subsequently get paid to pitch to you. Google is certainly trying to get in on social with its Google+ network, but its monthly active user base still lags. A Big G exec recently disclosed that Google+ is now up to 100 million MAUs, a far cry from Facebook's 955 million MAUs.

Social ads are a unique proposition that Facebook can offer to advertisers, so when I started seeing Sponsored Stories in my own mobile News Feed, telling me that my cousin "likes" Samsung Mobile USA or that my best friend "likes" Duracell batteries enough to "like" its brand page, I wasn't too concerned.

At the very least, I now get to interrogate my friend as to why he's so passionate about his brand of battery and ask why he's picking a fight with the Energizer bunny (my money's on the bunny, I hear it has incredible stamina).

I figured that Facebook's gotta make a buck or two for itself somehow, considering its service is "free and always will be," so a little bit of relatively unobtrusive social advertising didn't bother me much. So long as Facebook is able to successfully walk the fine line of sponsored advertising without offending users, it won't hear a complaint out of me.

That was until I saw this: 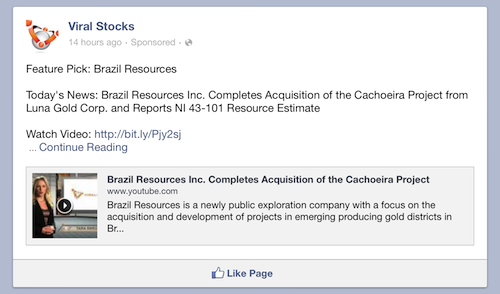 Brazil Resources is a small foreign company whose shares trade around $1 on the pink sheets. Translation: it's a penny stock.

What ever happened to social?
Unsurprisingly, Facebook has used its magical powers of deduction to figure out that I am indeed interested in stocks. It then decided it was a good idea to advertise Viral Stocks, a penny-stock newsletter, to me. Unfortunately, there's no social aspect of this ad. Most of my friends aren't interested in stocks, especially those of the infectious type, and I wasn't shown this because any of my friends had "liked" the Viral Stocks page.

Viral Stocks is a run-of-the-mill penny-stock-pumping service, which will disseminate news releases for $3,000 a pop. Bulk buyers are treated to a discount, though -- $10,000 for four releases! Here's an actual example of the service's "proven results" for Prosperity Goldfields ﻿earlier this year:

Source: Viral Stocks. Author realizes that $0.70 represents a return greater than 20%, but Viral Stocks evidently does not.

Facebook is just taking an educated guess that this ad might be remotely relevant to me, and it's very mistaken. The irrelevant display ads on the side that it used to show me were at least easily ignorable thanks to my practiced disregard of banner ads. Placing a rather large, non-social, and particularly obnoxious Sponsored Story directly in the news feed is approaching the point of putting off users.

Perhaps this was the work of Facebook Exchange, the company's new bidding system for advertisers to bid on highly targeted display ads that launched earlier this month. Or maybe it was just a shot in the dark. Either way, I'm not liking it.

Please, Facebook. Don't do this. Otherwise you're just going to become the social penny stock spammer of the 21st century.