T-Mobile gets a much-needed cash infusion and Crown Castle grows 33% overnight at a bargain-basement price. What's not to love?

A year ago, AT&T (T -0.99%) was still trying to acquire T-Mobile USA in a blockbuster $39 billion deal. But the deal fell apart and the fourth-largest American cell network found itself being... well, still number four with little hope of ever rising higher.

So T-Mobile is scrambling to catch up with larger rivals AT&T, Verizon (VZ -1.03%), and in-betweener Sprint Nextel (S). The new plan involves "investing in areas where we anticipate the strongest return for our customers," in the words of T-Mobile USA chief John Legere. And that takes a lot of cash.

So the network has hammered out a deal with cell tower operator Crown Castle International (CCI -3.05%), where Crown Castle pays $2.4 billion up front for the right to lease the 7,200 cell towers that T-Mobile owns. As the leases expire, Crown can buy the properties outright for another $2.4 billion, spread out over the next -- yes, really -- 36 years.

The lease-to-buy option is hardly a get-rich-quick deal for T-Mobile, but the initial $2.4 billion payment can certainly help the company compete in the next-generation network wars.

It's also a good deal for Crown Castle. CEO Ben Moreland cheered the deep value he's getting, as the company is paying 9% of its enterprise value in return for a 33% expansion of its tower network. T-Mobile's towers also happen to be concentrated around metro areas, where Crown Castle needs to invest the most if it wants to stay competitive with larger rival American Tower (AMT -2.70%).

Maybe T-Mobile should have asked for a bit more cash up front, but that's nothing but nitpicking. This is a solid deal on both sides of the table.

The tower operators play a vital role in the mobile ecosystem. They've been tremendous value generators over the last five years, even if most investors tend to ignore them: 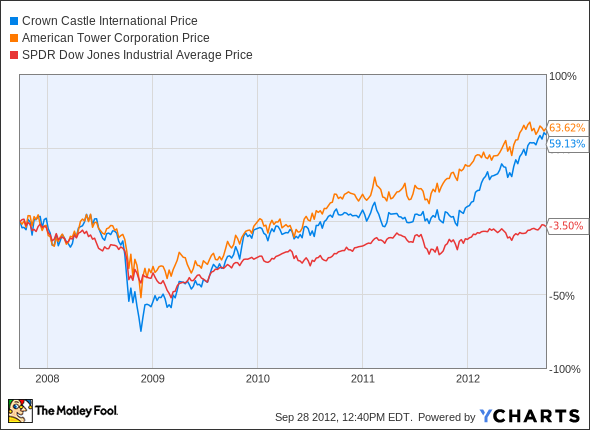 But the mobile industry is packed to the rafters with surprising winners. The one ticker we've pinpointed as the most surefire bet of them all in this trillion-dollar revolution would have had you question the Fool's collective sanity just two years ago. Now, that pick doesn't look so crazy anymore.

Fool contributor Anders Bylund holds no position in any of the companies mentioned. Check out Anders' holdings and bio, or follow him on Twitter and Google+. Motley Fool newsletter services have recommended buying shares of American Tower. The Motley Fool has a disclosure policy.

We Fools may not all hold the same opinion, but we all believe that considering a diverse range of insights makes us better investors. Try any of our Foolish newsletter services free for 30 days.