Transocean can't seem to get out of its own way in the offshore drilling market. At a time when ultra-deepwater drilling rigs are in super-high demand the company may be kicked out of Brazil, one of the best drilling markets in the world.

Yesterday, the company was served with a preliminary injunction by a Brazilian court that would force it to remove all nine of its rigs from the country's coast within 30 days. The verdict comes as the result of an oil spill last November that oozed 3,600 barrels of oil at a well drilled by Transocean in a field operated by Chevron . That spill pales in comparison to the Deepwater Horizon spill in the Gulf of Mexico, which was also a Transocean rig.

Transocean earns 11% of revenue from Brazil, so this would be a huge blow for the company. The rigs in question would earn no revenue if the injunction goes into effect, and there isn't enough time to move the rigs to revenue-earning locations quickly.

New contract
While that was going on in Brazil, management was closing some incredible contracts for ultra-deepwater newbuilds that are still years out. The company announced today that Royal Dutch Shell signed 10-year contracts for four newbuilds that won't be available until at least 2015. The ships will cost $3.0 billion but the contracts are for $7.6 billion, a price of $520,000 per day. This is lower than the $600,000 per day range we've seen recently from competitors like Seadrill but the contract length more than makes up for the slightly lower daily cost.

It's contracts like this that show just how strong and profitable the ultra-deepwater market is right now, which should help drilling stocks going forward.

Competitors look better
The problem for Transocean investors is that the oil spills highlighted above have put a huge damper on the company's opportunity in deepwater drilling. By contrast, Seadrill and Noble , two of the companies also making a big push into ultra-deepwater drilling, have had smoother sailing and better performance. The chart below shows that both companies have outperformed Transocean over the past two and a half years, with Seadrill up over 76%. 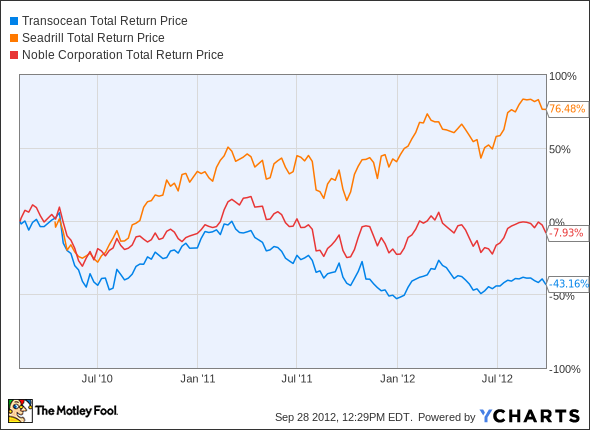 Making the right moves
Transocean has made a good move to sell shallow water drilling rigs and put a focus on ultra-deepwater. Now it needs to turn that into operational performance by eliminating costly oil spills from its future. New ultra-deepwater drill rigs should add a significant amount of earnings to the bottom line, but only if the company can avoid shooting itself in the foot.

Foolish bottom line
The challenges facing Transocean in the short term are troubling, but I think a resolution can be reached before too much damage is done. Petrobras, the Brazilian state-owned oil company, is Transocean's biggest customer in Brazil so the court is essentially hurting its own country with the injunction. But that doesn't mean that Transocean's challenges would be behind it.

Unlike Seadrill and Noble, who are running on all cylinders, Transocean is performing so poorly that management had to stop paying a dividend this year. Until Transocean reaches a steady state for operations and begins paying a dividend again I think investors should steer clear of the risks. After all, there's plenty of time before the four drillship contracts announced today take effect and begin affecting earnings. In the meantime there are better deals out there.

Find out why our energy analyst thinks the future is bright for Seadrill in our premium report on the stock. The report comes with a year of updates when new events may affect the investment thesis. Find out more by clicking here.