This stock just hit a 52-week milestone. Where will it head from here?

Shares of Atmel (NASDAQ: ATML) hit a 52-week low on Tuesday. Let's look at how it got here and whether more downside is in store.

How it got here
In July, the microcontroller specialist reported second-quarter earnings. Revenue fell 23% from the year prior to $368.2 million, gross margin plummeted to 44%, and charges associated with restructuring activities in Europe made net income practically non-existent.

The company was able to score the touchscreen microcontroller spot in Amazon.com's (AMZN 2.57%) new Kindle Fire HD, just as rumored, beating out Ilitek, who supplied it the first time around. That's a high-volume win as one of the better selling Android tablets out there.

More recently, Atmel saw an analyst downgrade from buy to neutral that triggered a brutal sell-off. UBS analyst Steven Eliscu dropped his rating on the stock on the belief that Korean rival Melfas has been earning spots at one of Atmel's important customers, Samsung. Atmel also doesn't have any Apple spots, as Texas Instruments (TXN 1.28%) and Broadcom (NASDAQ: BRCM) provide the dual-chip microcontroller pair in the iPhone 5. With Samsung and Apple being the two smartphone heavyweights, the company might miss out on some of the action.

How it stacks up
Let's see how Atmel compares to some of its microcontroller peers. 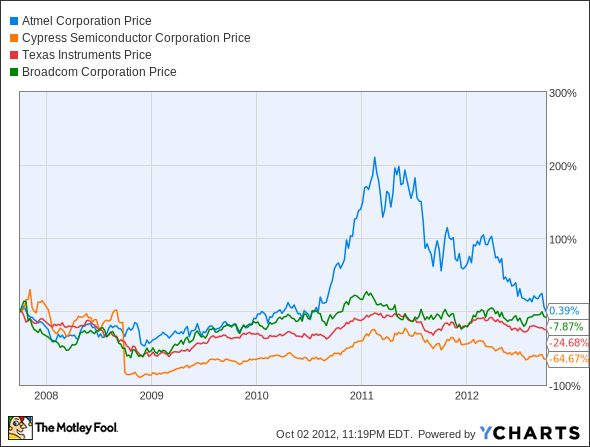 We'll include some fundamental metrics for a deeper read.

Many semiconductor players are seeing shrinking sales, but Atmel has it worse than others. Cypress is the least profitable of this bunch. Broadcom is seeing strong demand for its Wi-Fi combo chips, which is helping sales. Meanwhile, TI is in the midst of a transition as it restructures its wireless division, so some revenue losses are expected there.

What's next?
Atmel is hoping to ride the touchscreen wave of Microsoft Windows 8. If the next-generation operating system takes off, then Atmel could hitch along for some tablet gains. In the meantime, it will still enjoy Kindle Fire HD unit sales.