Biotech company Affymax (OTC:AFFY) soared to a new 52-week high today after its share price jumped more than 5%. The company didn't release any new information today, but the significant rise happened after investment firm Lazard Capital increased its price target for the stock.

Shareholders should be happy with today's result, but it's more important to invest in a company that you believe will succeed over the long-term instead of blindly following moves on Wall Street. Let's take a look at Affymax's business and see if this stock can continue exceeding expectations.

What will Omontys amount to?
Affymax gained FDA approval for its drug, Omontys, in March, and the company's share price has been flying high ever since. Omontys, which was co-developed by Affymax and Takeda Pharmaceuticals, treats anemia in dialysis patients who are suffering from chronic kidney disease (CKD). This may seem like a limited market, but most of the CKD patients currently on dialysis in the US are also anemic. Affymax could generate strong profits in the coming months, and the company's market value reflects this potential. Affymax's year-to-date share price has appreciated around 265%: 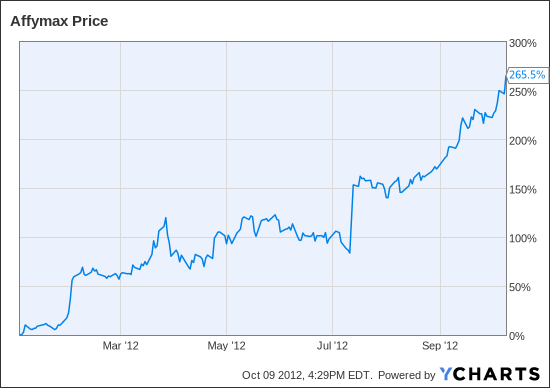 A good or bad quarter?
While Affymax missed analysts' expectations last quarter, its earnings report was typical for a small biotech getting its first drug to market. Most of the revenue related to Omontys' development has already been paid, so Affymax's year-over-year revenue from the Takeda partnership decreased 80% to a mere $2.8 million. Meanwhile, the company's SG&A costs ballooned by more than 160% as it expanded the Omontys sales team. This trickling revenue and deluge of expenses weighed down Affymax's bottom line, and the company reported a $32 million net loss.

While investors should keep an eye on Affymax's expenses and burn rate, the company has plenty of cash on hand to comfortably continue operations. The company's success, however, hinges on Omontys' upcoming sales -- and all eyes will be on this figure when Affymax unveils its third-quarter earnings in November.

Battle between the David and Goliath of biotech
Affymax and Takeda have entered a market that Amgen (NASDAQ:AMGN) has dominated for more than two decades – and it looks like the biotech colossus is prepared to aggressively defend its market position.

Amgen's CKD anemia drug, Epogen, raked in more than $2 billion in fiscal 2011 and accounted for more than 13% of the company's total revenue. Amgen recently cemented some of its future Epogen sales by signing a long-term contract with a leading dialysis services provider, DaVita (NYSE:DVA). Under the terms of this agreement, Amgen will supply at least 90% of DaVita's total anemia medication needs until the contract expires in 2019.

Amgen also has a non-exclusive deal with DaVita's competitor, Fresenius Medical Care (NYSE:FMS), but Affymax and Takeda may be able to grab some market share here. Takeda recently announced a 10-month Omontys supply agreement with Fresenius in the U.S., and Fresenius will initially use the drug in 100 centers. If both clinicians and patients are satisfied with the results, Fresenius could use Omontys in all of its centers. Takeda also won a contract to supply dialysis provider U.S. Renal Care with Omontys, and it's imperative for investors to track any forthcoming deals.

The main advantage that Affymax has in this market is that Omontys has to be given to patients only once a month, while Epogen requires several doses. This is not only attractive to patients, but it may also cost dialysis providers less money.

Is Affymax maxed out?
It is difficult to predict Affymax's trajectory this early in the game. Investors enjoyed Affymax's significant share-price pop after Omontys was approved, and today's increase was another indication that the market has high expectations for this stock. However, investors should keep an eye on the drug's sales in upcoming quarters. If Affymax and Takeda are able to secure an exclusive contract with Fresenius or other dialysis providers, then sales of the drug will be solid and predictable for a number of years. However, failure to meet sales projections could result in a significant share-price drop.