Shares of Intel (NASDAQ:INTC) hit a 52-week low today. Let's look at how it got here and whether more downside is in store.

As one of the most crucial suppliers in the PC value chain, Intel's fortunes are inextricably tied to the broader PC market, for better or for worse. Lately, that means for worse, as PC unit sales have languished.

A month ago, the chip giant was forced to cut its third-quarter sales guidance and now expects third-quarter revenue to range from $12.9 billion to13.5 billion, down from the prior range of $13.8 billion to $14.8 billion. That means that Intel might not put up revenue growth this year, considering it would need to post a record-smashing fourth quarter to do so.

Shares were particularly weak today, falling by nearly 3% after an analyst downgrade. Bernstein dropped Intel's rating to underperform and reduced its price target to $20, in part because analysts expect a shift away from higher-end chips to lower-end processors over the next 12 to 18 months. Nomura Securities added fuel to the bearish fire, saying gross margin should continue lower until next year.

How it compares
Let's see how Intel's performance compares with some of its semiconductor peers. 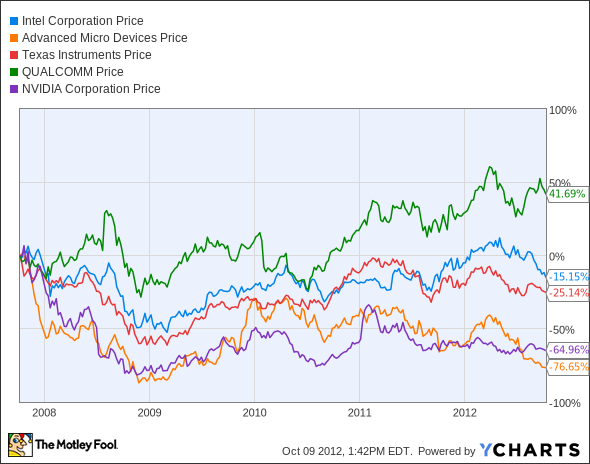 We'll look at some fundamental metrics as well.

AMD has long competed with Intel in traditional PC chips, but has also missed out on mobile. It's hoping to power Microsoft (NASDAQ:MSFT) Windows 8 tablets, but has no presence in smartphones. Intel has also become a player in the baseband market, following its acquisition of Infineon's wireless unit two years ago. There, it hopes to challenge Qualcomm's dominance, while Texas Instruments has already abandoned that sector (along with ditching mobile processors). NVIDIA wants to play, too, acquiring Icera just last year and complementing those basebands with its Tegra processors.

What's next?
Mobile has been a weakness for Intel in recent years, but the company is hoping to change that as it pushes into smartphones like the Motorola RAZR i. Its big tablet push will rest upon the success or failure of Windows 8, which can't get here soon enough for Chipzilla.