Please ensure Javascript is enabled for purposes of website accessibility
Log In Help Join The Motley Fool
Free Article Join Over 1 Million Premium Members And Get More In-Depth Stock Guidance and Research
By Alex Planes - Oct 10, 2012 at 11:30AM

Learning from the market’s past to understand its present.

On this day in economic and financial history...

The Dow Jones Industrial Average (^DJI 0.00%) went through the wildest point swing in its history on Oct. 10, 2008. Falling by 697 points below its opening level, and then rising as high as 322 points toward the end of the day, the Dow closed with a loss of 128 as the market digested news and analysis of the Lehman Brothers debt auction.

The Volatility Index (^VIX 4.87%) also set what was at the time an all-time record high on Oct. 10, 2008, rising to an intraday level of 76.94 before settling to 69.95. That intraday record was broken later in October with a high of 89.53, although its all-time high closing level wouldn't be reached until late that November, when it reached 80.86.

The words out of Wall Street reflected this sense of panic. CNN Money interviewed several insiders after the markets closed, and all offered unanimously dour sentiments:

Welcome to the big leagues
Recent Dow addition UnitedHealth (UNH 0.73%) began its march to index acceptance on Oct. 10, 1991, when it joined the New York Stock Exchange. Since making the leap to the big leagues, UnitedHealth has been among the best performers of all Dow stocks, handily beating dot-com darlings Microsoft (MSFT 1.07%) and Intel (INTC -2.86%) over the same time frame and trouncing many of the Dow's most venerable members: 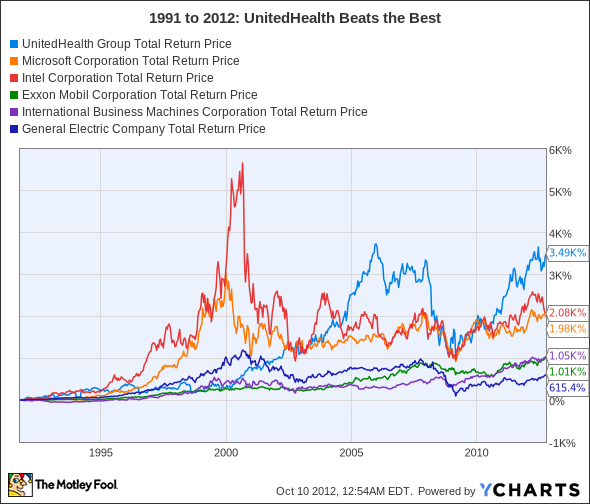 This is no accident. Microsoft and Intel get an impressive amount of publicity for their every bottom-line move, but neither company can stack up to UnitedHealth's substantial profit growth since the tail end of 1991. Few companies can, especially not the Dow's megacap market leaders: 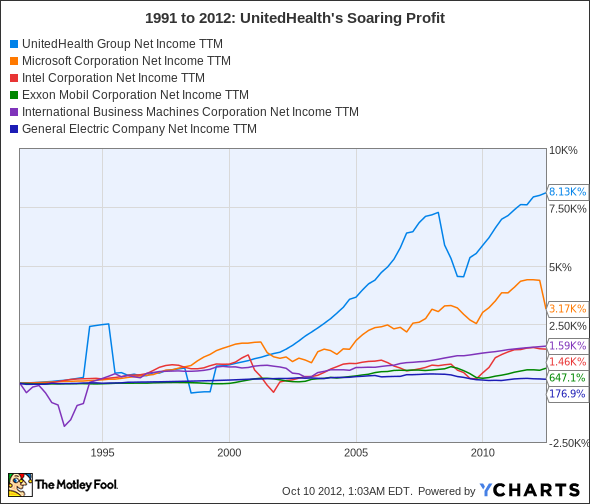 Few investors could have seen UnitedHealth coming in 1991, but the company's more than proven its worth, and it has earned its place on the Dow today with decades of understated outperformance.

United Health was a fantastic long-term investment for dedicated investors of the early 90s. Where will the next millionaire-making megamultibagger come from? The Fool has found three hidden gems that -- like UnitedHealth in the 90's -- are flying under Wall Street's radar right now despite their excellent potential. You can get all the details in our exclusive free report. Want to know more? Click here to get the information you need, at no cost.