A look back at Costco and Wal-Mart’s past year.

Shares of big-box retailers Costco (COST 1.24%) and Wal-Mart (WMT 1.97%) both hit 52-week highs yesterday. Let's look at what's behind these two retailers' recent movements to better understand what might happen in the future.

How it got here
Costco investors had reason for cheer this week, as the company reported excellent earnings that set the stage for a rally. Wal-Mart won't report for a while, but news that the world's largest retailer is taking the same-day delivery fight to Amazon.com (AMZN 3.66%) is just one small element of a long-brewing rebound.

Over the last five years, Amazon and "the Costco of Latin America" upstart PriceSmart (PSMT 0.96%) have dominated the big-box retail stocks, but neither Costco nor Wal-Mart have been disappointments. Only Target (TGT 2.41%) has had a weak five-year run, but 2012 has brought it back to the market's good graces, and the tables have turned on the retail upstarts, which are both underperforming their established big-box peers: 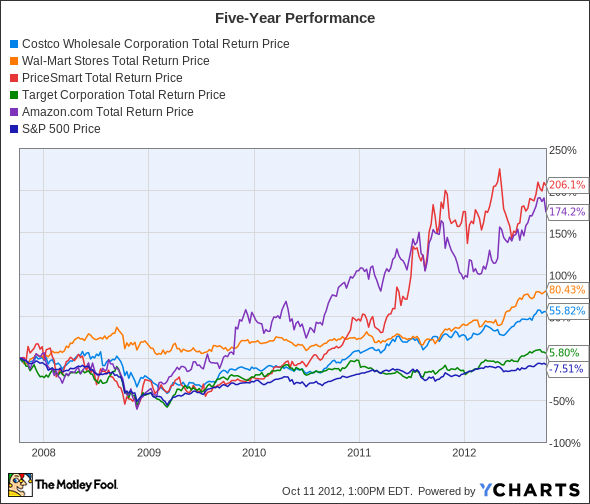 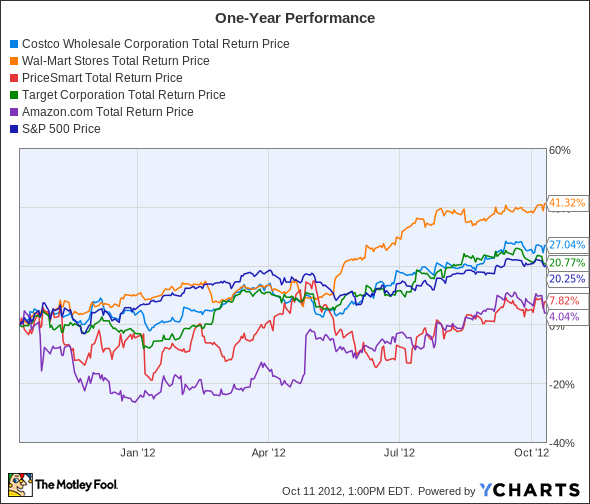 What's behind the big-box comeback? Let's dig into the numbers first to find out.

What you need to know
For most of these companies, a high expected growth rate corresponds to a higher present P/E. Only Target seems to offer an underwhelming valuation, but a glance at a price-to-free-cash-flow valuation brings it closer in line with the rest:

Let's dig deeper for a moment. Over the last few years, only Amazon has enjoyed a significant valuation run-up, and I've voiced my doubts that this process can continue. However, in the last year, four of these five stocks have seen increased P/Es. The only exception is Costco: 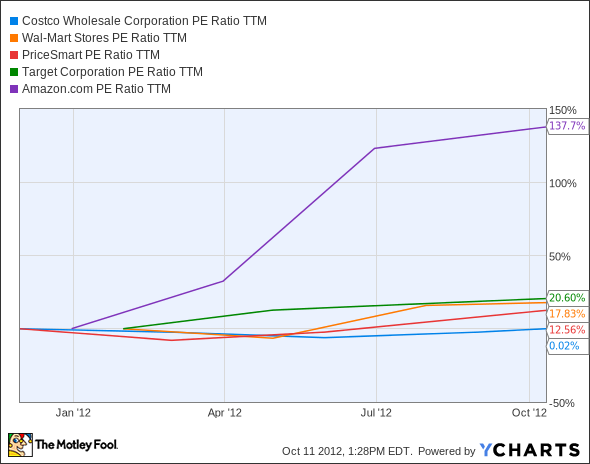 That doesn't mean that the gains are unsustainable -- at least not for the bricks-and-mortar stores. Wal-Mart's current P/E is higher than its five-year average, but only by 1.4 points, which is hardly a height begging a pullback. Costco's P/E is about five points higher than its five-year average, but its only extended stay below a P/E of 20 was during the 2008 crash, which isn't representative of its usual performance.

Wal-Mart is primed for a strong holiday season, as two of our Foolish analysts predicted last month. However, there is always the problem of growing sales in what's already the world's largest retailer. How much growth can you expect from a company that already has more annual revenue than the GDP of Argentina?

Costco's latest quarter was bolstered in part by its membership-fee increase, but same-store sales weren't bad either, notching a 5% gain that's well ahead of this summer's 3% same-store sales improvement. That's a sign that things are looking up, since a pinched consumer is obviously less likely to pony up extra for membership fees just to buy jumbo-size packages of everything.

What's next?
The holiday season will be a big one for both retailers, and underperformance could send shares lower. However, there's little reason to fear more than a temporary pullback as long as global consumers continue to see improvements in their own family bottom lines. I'd buy Costco before Wal-Mart for a long-term portfolio, as it has more room for market-beating growth.