Are happy days here again? University of Michigan's consumer sentiment index surged this month to the highest level since September 2007, before the last recession began: 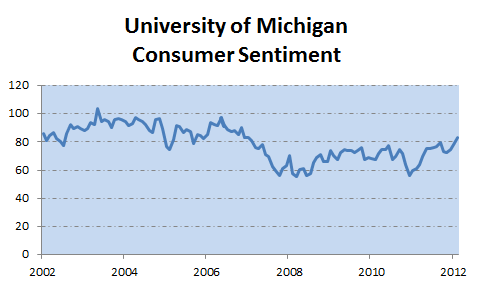 Consumer sentiment is a coincident indicator -- it tells you what just happened, not what's about to happen. It's not very useful for forecasting.

But it provides insight into the American consumers' brain. Sentiment is primarily influenced by:

Probably in that order.

Of those, unemployment recently hit its lowest level in almost four years. Stock prices are at multi-year highs. Gas prices -- with the exception of California -- aren't low by any means, but America is adjusting to a new-normal of prices in the high-$3 range. Just look at the increase in average miles per gallon. And Congress is now on recess, though the looming fiscal cliff is bound to freak people out before long.

Here's what's interesting. While consumer confidence is rising, CEO confidence isn't. The Conference Board's measure of CEO confidence fell to 42 last month, with anything below 50 meaning more negative than positive assessments. "CEOs' assessment of current conditions remains weak and they have grown increasingly pessimistic about the short-term outlook" the organization wrote.

The fiscal cliff specifically is one of the major ways in which the slow recovery that we have could be completely derailed. You know, hard landing in China, Euro collapsing, problems in the Middle East, and fiscal cliff is probably paramount in that area.

So, consumers are happy, businesses are scared. Time will tell who's right.