Avon shares have slightly underperformed the S&P 500 over the past quarter-century, whacked by a recent fall: 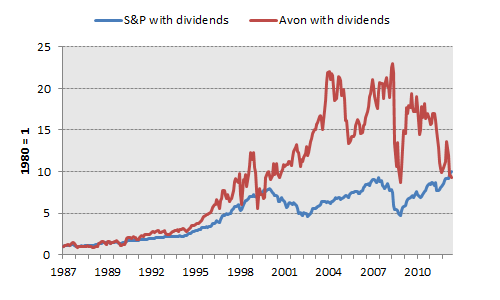 Now have a look at how Avon earnings compare with S&P 500 earnings: 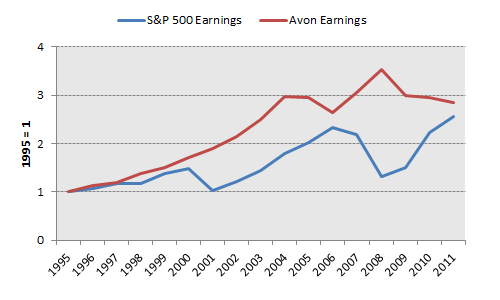 Pretty average here, too. Since 1995, Avon's earnings per share have grown by an average of 6.8% a year, compared with 6% a year for the broader index.

What's that meant for valuations? Avon has traded for an average of 23 times earnings since 1987 -- just below the 24 times earnings for the broader S&P 500. It's far different today, however. Avon currently trades for about 17 times next year's expected earnings.

Through it all, shares have been average performers over the past quarter-century.

Of course, the important question is whether that will continue. That's where you come in. Our CAPS community currently ranks Avon with a two-star rating (out of five). Care to disagree? Leave your thoughts in the comment section below, or add Avon to My Watchlist.

Stocks for the Long Run: Avon vs. the S&P 500 @themotleyfool #stocks $AVP Next Article
Current