Shares of Annaly Capital Management (NYSE:NLY) hit a 52-week low on Monday. Let's take a look at how it got there and see if clear skies are still in the forecast.

It's sort of comical that Annaly has hit both a 52-week high and low within a matter of weeks, but that's what happens when the 52-week high-low spread is just $2.48.

At the heart of Annaly's problems, and the whole sector for that matter, are continued actions by the Federal Reserve to keep lending rates at historic lows through at least mid-2015 and support a rebound in the housing market. Operation Twist, which involves the Fed selling short-term debt securities and purchasing equal amounts of long-term debt securities to push rates lower is one threat to Annaly's already falling net interest margins. Also, the Fed's QE3 announcement that it will be indefinitely buying $40 billion worth of mortgage-backed securities each month shrinks the available pool of purchasable MBSes for mREITs and threatens to push net interest margins even lower.

What the mREIT sector is really coming down to is a risk profile between agency loan bearers like Annaly and American Capital Agency (NASDAQ:AGNC), which invest only in government-backed agency loans, and those who buy both agency and non-agency loans like Invesco Capital Mortgage (NYSE:IVR), Chimera Investment (NYSE:CIM), and Two Harbors Investment (NYSE:TWO), who have at least some exposure to non-government backed loans. As you can expect, those mREITs investing in non-agency loans have the potential for higher net interest margins, but they also sport significantly more risk than their agency-only counterparts. Similarly, leverage rates tend to be higher for Annaly and American Capital since their MBS portfolios are backed by the U.S. government while Chimera, Invesco, and Two Harbors generally have much lower leverage ratios.

How it stacks up
Let's take a look at how Annaly Capital Management stacks up next to its peers. 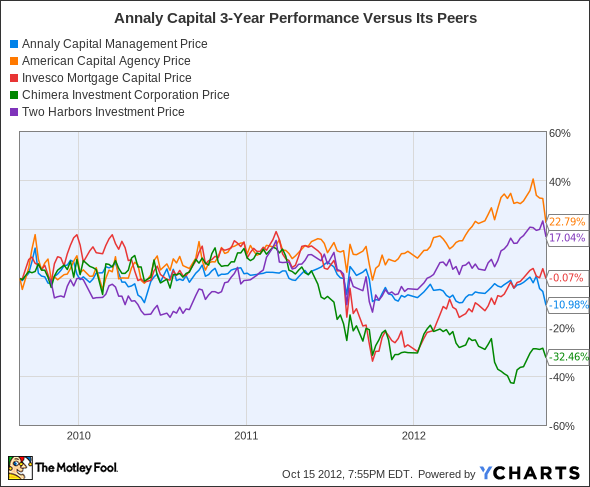 As you can see, up until the midpoint of last year, these companies were trading more or less in line with one another -- then things became interesting. American Capital has been the brightest company of the bunch, historically also returning the highest yield. On the flip side, Chimera has been the worst performer, most of which can be blamed on its one-year hiatus from filing its quarterly reports on time because of a financial accounting audit. Somewhere in the middle lie Invesco, Two Harbors, and Annaly Capital.

While all five offer double-digit dividend yields, shrinking net interest margins could eventually remove both Annaly and American Capital from those ranks. Keep in mind, though, that agency-only MBS companies are still healthfully profitable even though they're finding new and profitable MBSes harder to buy thanks to QE3.

What's next
Now for the $64,000 question: What's next for Annaly Capital Management? That question really depends on how long the Fed plans to continue Operation Twist, its QE3-sponsored MBS purchases, and whether it can buoy its net interest margin.

Our very own CAPS community gives the company a four-star rating (out of five), with 87.7% of members expecting it to outperform. Count me among the more than 2,350 optimists as I too have an outperform CAPScall on Annaly that's currently in the red by nine points.

Even though Annaly's margins have been falling and its dividend yield is likely to dive further, I don't see this as a reason to abandon the stock. I do, however, see it as a reason to get your expectations for the company back into a realistic box. Historically, Annaly does deal with net interest margin downswings now and then, but its yield has never dipped below about 4% over the past decade. As an mREIT investing in agency loans, it has little to worry about with defaults as long as there isn't a truly epic deterioration in the housing sector. Slow but steady will win the race, and Annaly looks poised to capitalize on its slow but steady approach to profits.

Will QE3 be a death knell to the dividend of America's favorite mREIT, Annaly Capital? Find out the answer to this question and much more by getting your copy of our latest premium research report on Annaly Capital Management. Crammed with in-depth and unbiased analysis on the opportunities and threats facing Annaly -- and complete with a year of regular updates -- this report will give you the tools needed to make smart long-term investing decisions. Claim your investing edge now!