Taylor Muckerman
(TMFrunAMuck)
Author Bio
Follow @t_Muckerman Taylor is an Associate GM in our Fool International operations. Prior to that he covered all things Energy + Materials as an analyst. Over the years, he has built an investing skill set to rely on when evaluating companies inside and out. While at the Fool, he has made appearances on CNBC and Fox Business. In addition, he completed his MBA at the University of Maryland and will sit for the Level II CFA Exam.

For the past year or two, natural gas has been the bane of coal's existence in the United States. Record low prices in April of this year dipped below $2.00/MMBtu, reaching $1.907/MMBtu, before they started a slow climb to their current Henry Hub spot price of $3.31 (as of 11:30 a.m. on Oct. 19). Now, some might wonder how natural gas is still harming the coal industry after prices have risen 74% over the past six months. The answer requires a much longer history than simply retracing its course over this year. Since the gaseous commodity reached its five-year high of $13.31/MMBtu on July 2, 2008, utility companies have been slowly reducing their reliance on coal for two reasons: The precipitous drop in natural gas prices has made it a much more economical choice for power generation, and environmental regulations have made retrofitting coal plants a very expensive endeavor.

Over these past five years, major coal companies have severely underperformed the broad S&P 500 index. Taking a look at the following price chart, you can see that Peabody Energy (NYSE: BTU), the largest private coal company in the U.S., has dropped 43.67%. It is "outdone" only by Arch Coal (NYSE: ACI) and Alpha Natural Resources (NYSE: ANR), each of which is down more than 65% since October 2007. Compare this with the S&P 500, which is down only 3.85% over this same time frame, and you're left with a clear snapshot of an industry falling off a cliff.

In 2011, 92.9% of all coal met its final destination at an electric utility or an independent power producer. Filling in the remaining 7.1% were coke plants (steel production) and "other industrial and commercial" users. So it's no wonder that when utilities were making dramatic switches from coal to natural gas in 2011 and 2012, these companies saw revenues and, in turn, stock prices decline so precipitously. Take a look at the effect that substitution was having on the amount of coal used in U.S. power generation from 1950 until April 2012: 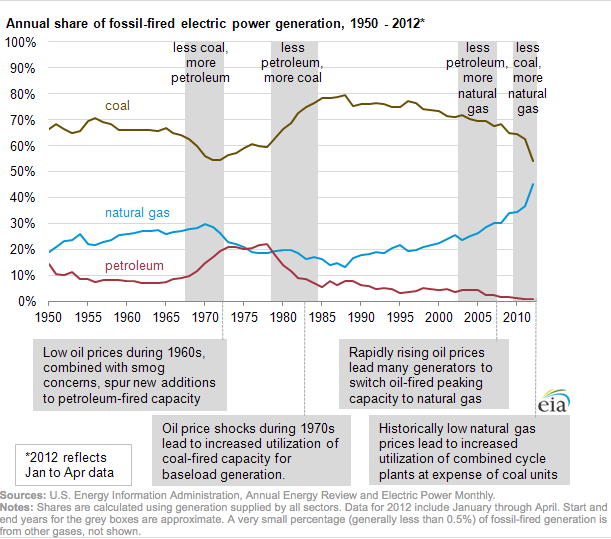 To combat this reduction in domestic demand, coal companies and those that export the subterranean material are turning toward the export markets at a time when demand outside the U.S. is rising rapidly. In 2011 alone, coal exports rose 31% over 2010 shipments. Since mid-2009, Europe and Asia have been the main customers, accounting for around 76% of all exported coal in 2011.

Several factors have kept Europe as our No. 1 customer in recent years, some of which are the exact opposite of the problems we have here in the States. The situation with the most impact is that prices of natural gas in Europe are far higher when compared with coal than the stateside spread, so coal is a much more cost-effective choice for power generation. Paolo Coghe, an analyst at Societe Generale, has said: "In Europe, it would take a 50% increase in coal prices to erase the price advantage over natural gas." This mirror image of our domestic situation has provided a great outlet for U.S.-based coal miners. As a result, exports to Europe rose 29% in the first quarter of 2012 over the same period last year.

To take advantage of this surge in international demand, coal companies such as Arch Coal, Alpha Natural, and Peabody have been concentrating their efforts on long-term export deals with companies such as Kinder Morgan Energy Partners (NYSE: KMP) that operate coastal terminals capable of exporting coal in mass quantities. KMP has terminals lining the coasts of both the Gulf of Mexico and the East Coast. According to its recent Q3 2012 press release, it's spending $400 million to expand these facilities' throughput capabilities. Post-expansion capacity should reach 27 million short tons per year. Keep in mind that a 20-year record 107 million tons were exported from the U.S. last year (just shy of the all-time record of 112 million set in 1981), so this will be a significant improvement over current means.

This announcement of a boost in capital expenditures was not unwarranted. In the very recent past, KMP signed long-term export deals with both Arch Coal and Peabody Energy to export from their Gulf and East Coast terminals. The deal with Arch Coal lasts through 2015 and allows for up to 6 million tons of coal to be exported each year, with an expected minimum of 4 million tons. The more recent agreement with Peabody is reportedly for 5 million to 7 million tons starting in 2014 and running through 2020. Not to be outdone, CONSOL Energy (NYSE:CNX) will be expanding its Baltimore export capacity by 2 million tons per year, as the company witnessed a 68% rise in coal exports in 2011.

Accurate foresight goes along way in determining the success or failure of both businesses and industries. It appears that these companies have made some serious bets on the continued international demand for coal, and their success could largely depend on the continuation of this trend. Should Europe and Asia continue their current power generation plans, look for all of these companies to be well positioned to make up for natural gas' impact on their domestic operations.