On Dec. 23, 2011, the U.S. Department of Justice announced that it had changed its stance on online gaming, saying that the Interstate Wire Act of 1961 -- previously cited in declaring online gaming illegal in the U.S. -- only applies to sports betting. The industry has quickly mobilized, with Nevada having already passed legislation legalizing online poker, while Delaware has legalized a full suite of online casino games.

In fact, the licensing process has already begun in Nevada, with International Game Technology (NYSE:IGT) and Bally Technologies (NYSE: BYI) gaining licenses as business-to-business suppliers in June. In August, South Point Poker became the first company granted a license as an online poker room operator, and planned to be up and running this month, though it appears that delays in the testing process could push the opening toward the end of 2012 or early 2013.

So it would seem that payday is near, and we should start picking winners. And if you are a poker player, it might seem like time to PartyPoker like it's 2006.

The online poker opportunity: A fraction of a fraction
There are three problems here.

The first problem is that when we are talking about legalizing and regulating online gaming across the United States in general, we are really only talking about poker in the near term (with the exception of Delaware). And the potential for online poker would not be $6 billion to $10 billion, but rather some fraction of it.

The second problem is that when the AGA says that "millions of Americans spend $4 billion every year to gamble online" on unregulated offshore sites, the AGA is talking about millions of Americans in 50 states. In this sense -- and the AGA points to this as an argument in favor of federal legislation -- federal legislation would not represent an expansion of existing gaming, but rather a restriction on existing gaming by strengthening the Unlawful Internet Gambling Enforcement Act of 2006 (UIGEA), and more effectively eliminating online gaming in states which would not opt in (like Utah, for example). In other words, we might only have legal online poker in 20 or 30 states rather than unregulated online poker in 50 states, thus further narrowing the market. And as such, the potential for online poker would more likely be a fraction of a fraction of $6 billion to $10 billion.

And the third problem is that online poker in itself may not be all that attractive a business for would-be operators.

Let's start with the headlines, which I pulled from various sites across the Internet:

Now for the financial reports: 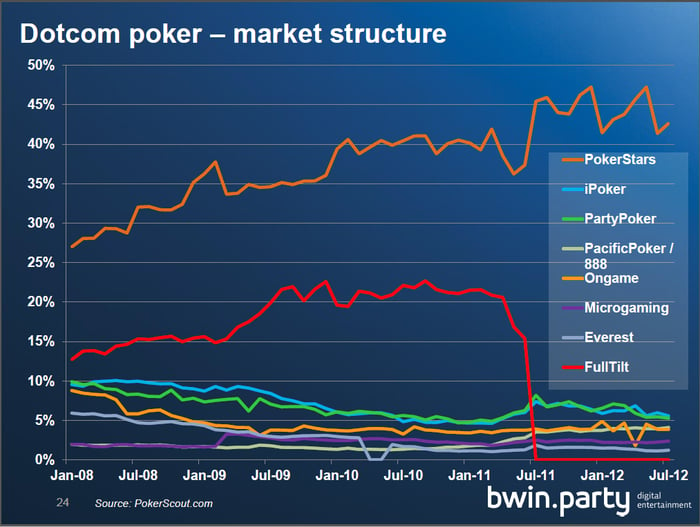 So this is basically what the online poker industry looks like: We have one player -- PokerStars -- which, following the Full Tilt acquisition, will have in the neighborhood of 50% to 70% market share of the dot-com online poker market. PokerStars benefits greatly from strong network effects where online players will continually gravitate to one large site with the greatest volume and the greatest variety of games and offerings, in much the same way that eBay benefits from network effects where buyers and sellers ultimately gravitate to one site.

And then we have everybody else at less than 6% market share each.

We have an industry plagued by rising player acquisition costs and marketing costs as a percentage of revenues. Things like sign-up bonuses, rakeback programs, and affiliate programs used to acquire new players and drive traffic to a given site are expensive marketing tools that I am pretty sure have slim to negative value, particularly since a player has effectively no switching costs to move from site to site once a promotion has been exhausted. This is similar to slot free-play and table games match-play offers often used by bricks-and-mortar casinos, which are promotional offers that generally have negative value with little to no long-term benefit to the casino.

We also have countries like Spain, Italy, and France that have left the dot-com space and installed new regulations where players in each of those countries can only play poker online with players located in the same country (i.e., a player in Spain can only play with another player in Spain, and not against a player in France or Germany) on their respective .es, .it, and .fr sites. These regulations served to remove liquidity from these markets, made the markets less attractive, and effectively chased IGT from Europe.

And then, for online poker room operators other than PokerStars, poker revenue typically accounts for only a fraction of total online gaming revenues for each of these companies.

This last bit is instructive in its own way.

Federal vs. state-by-state legislation: Caesars as PokerStars -- or not
The official position of the AGA is that the AGA is in favor of broad federal legislation covering online poker (and eventually other online gaming) to avoid having a patchwork set of regulations as individual states legalize online poker on a state-by-state basis. However, the earliest anything could happen on the federal front is if something came together during the lame-duck session of Congress following the November elections.

And the sense I got during this year's G2E is that the chance of that actually happening this year is close to nil.

The problem is that the longer we go without federal legislation, the less attractive the market will be for prospective online poker room operators such as Caesars Entertainment and the MGM Resorts International (NYSE:MGM)/Boyd Gaming (NYSE: BYD)/bwin.party partnership, and to a lesser extent companies like Wynn or Las Vegas Sands (NYSE:LVS). This is because the longer we go without federal legislation, the more states will come online, and the more likely the industry -- and poker-playing Americans -- will get stuck with .nv, .ca, .mo, .pa., or .ny sites, and thus wind up with fractured poker markets that look like France, Spain, Italy, and Denmark.

What this means is that there would be no PokerStars-like online poker room on a national scale with loads of liquidity, large player bases, and wide game selection, or with the benefit of wide-reaching network effects, because competition would instead be on a state-by-state basis. In other words, Caesars -- the would-be best bet in online poker with the widest network of regional bricks-and-mortar casino properties to go with the WSOP brand -- would not look anything like PokerStars, and neither would MGM/Boyd/bwin.party with a similar combined national network.

Meanwhile, Wynn (which only operates in Nevada) and LVS (which only operates in Nevada and Pennsylvania) could be irrelevant players in online poker without intrastate compacts connecting Nevada or Pennsylvania (in the case of LVS) to other states, thus explaining these companies' relative indifference to the subject (and despite Sheldon Adelson speaking out against online poker last December, LVS as a company is not actually against online poker, but rather is taking a "take-it-if-it-comes" approach).

Bwin.party then goes on to list six steps to "optimize the poker ecology," which include:

There are too many professionals in the online space, and not enough fish. Thus, the game has gotten too tough to be interesting for the casual player, resulting in less overall activity.

Walk into any locals poker room in the country, and you are bound to find seven or eight regulars at the table. Back in 2006, when the average skill level of such regulars wasn't that high, this would be no problem for any reasonably skilled player. But in 2012, everybody is better, and the average skill level of the regulars has risen considerably, to the point that I think the average professional-level player in 2006 would be a fish in these games without having made similar advancements in his/her own game.

Consequently, the games today have become uninteresting to many former professionals -- even to those good enough to still beat these games -- because no matter how good you are, win rates will decline because the regulars aren't as bad as they used to be, and the fish are in shorter supply.

Meanwhile, the casual player today has no chance.

There is an underlying irony here, and it is that the professionals and other regulars in online poker space (called "regs" by online poker players) are generally the most valuable players on any given site. This is because these players put in the longest hours, and often play four, eight, or even 16 or more tables at a time.

But in a sense, poker is a self-defeating game where the most valuable players are also the ones killing it. And if you're a poker player looking for a return to the PartyPoker of 2006, you're not going to get it.

Online poker: An accretive gateway to online casinos
The bottom line is that I think any expectations regarding online poker should be tempered. I think that -- particularly if poker gets legalized state by state rather than with general guideline regulation at the federal level -- online poker should be viewed as accretive at best. In fact, online poker may more  properly be viewed as a gateway to more lucrative, full-scale online casino gaming five to 10 years down the line, rather than as a boom in and of itself.

And with regard to online poker operators, there aren't any companies I would go out and buy on the basis of online poker alone.

Regarding Caesars Entertainment -- presumably the best-positioned player in the market -- I just don't think there is any way you can reasonably justify buying the stock right now. The company has net debt of $19 billion vs. $2 billion in annual EBITDA; with net debt of 9.5 times EBITDA, that means that Caesars' entire equity valuation is basically dependent on a combination of the future value of online gaming operations versus the cost of what it will take to keep the company from going bankrupt.

As it stands, the company has no debt maturities until 2015, which doesn't sound so bad until you realize that number in 2015 is $7 billion. And by that time, Caesars as a company could look drastically different depending on what else the company decides to sell (it already jettisoned its St. Louis market property earlier this year). That may include a share-diluting IPO, or the IPO of Caesars Interactive, which is the entity that includes both Caesars' online gaming operations and the World Series of Poker.

And so basically, in order to justify buying Caesars Entertainment right now, you would have to be able to predict the unpredictable, starting with trying to figure out what online gaming is going to look like, and when -- and then trying to place a valuation on it.

But as I mentioned earlier this month, I do think MGM looks like a decent value based on existing operations -- including its Macau and Las Vegas operations -- at about nine times to 10 times EBITDA (see "G2E: On Value Investing and Macau Casino Stocks"), and that there is a lot less uncertainty surrounding the future of the company than there was this time last year. And as it happens, the company also announced on Thursday that it had won approval for a second Macau casino.

I think if you're keen on playing the online gaming space, I would bet MGM at a decent value based on current operations, and take any online gaming upside as cake.