At the beginning of 2012, I set out to form The World's Greatest Growth Portfolio. Though I can't promise it will always live up to its moniker, the portfolio has returned 24% in just 10 months, besting the S&P 500 by about 10 percentage points.

Yesterday, I outlined exactly how I would go about building my portfolio for next year: Invest first and foremost in companies that demonstrate exceptional levels of innovation, with special emphasis given to those that I believe will be around decades from now.

Today, I'm going to take a deep dive into one of last year's core stocks -- Google (GOOGL -7.68%)evaluate how I think the company is doing, and tell you if it might have a spot on this year's team. Read all the way to the end and I'll show you how to get access to a special premium report on the most talked-about stock in the world.

What's changed?
Some things are relatively easy to evaluate. The performance of a stock is one such thing. Here's how Google has fared so far in 2012, versus the S&P 500. 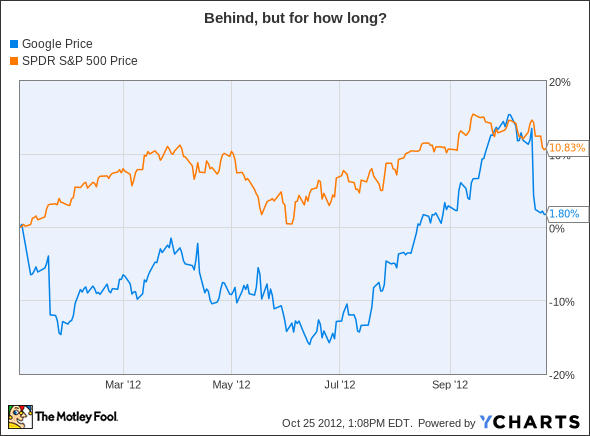 As you can see, Google finally caught up with the market index recently, only to stumble greatly on the most recent earnings report (more on that later).

But if we want to take a more nuanced view of how the company has performed, let's take a trip back and see why I made the company a Core holding in the first place.

I loved the domination Google had in the search realm, but I also loved all the different irons it had in the fire: Android was the only real rival to Apple's (AAPL -1.76%) iOS, YouTube monetization was just scratching the surface, and Chrome was gaining market share. I was also a big fan of the culture of innovation spearheaded by co-founder Larry Page.

Fast-forward to a year later, and I think the picture actually looks better: 500 million Android devices have been activated, with almost 1.3 million new devices each day; in addition to YouTube and the Chrome platform, Google has introduced the Chrome Book computer, and has had success with its Nexus 7 tablet against both the iPad and Amazon.com's (AMZN -2.02%) Kindle Fire.

By these measures, I'm encouraged by Google's performance.

Then, there's the earnings report
At first glance, you can see why Google's shares fell 8% when earnings came out: Earnings per share actually fell 7%, even though revenues were up 45%. When you read something like that, you become rightfully worried that someone in the front office may have lost his or her mind.

Such isn't the case with Google, though, as a few details need to be teased out. First and foremost, Google's acquisition of Motorola Mobility is now complete, and those numbers were taken into consideration for consolidated results. That's important to realize because comparing last year to now isn't close to an apples-to-apples evaluation.

If we back out the Motorola segment, we see that Google grew revenue by an impressive 19% over last year. And while the company was paid 15% less for every time a user clicked on a Google-sponsored ad, there were 33% more clicks overall.

In other words, last year the company sold 100 lemonades for $1 each. This year, even though the lemonade was just $0.85, 133 were sold, and the company collected 13% more money.

More impressive, a good portion of the reason the company's cost-per-click metric went down was because of foreign currency headwinds. In fact, if foreign exchange rates would have been the same from quarter three last year to this year, revenue would have actually been up a whopping 24%. That's a big difference!

Looking forward
Another big reason the most recent report probably disappointed was because the company spent 223% more on things like data centers, content acquisition, credit card processing, and manufacturing.

Larry Page has made it no secret that he intends to spend money on the activities where he sees Google performing well in the future. Sometimes, those activities will fizzle out, like the company's current attempt at a deals program similar to that of Groupon (GRPN -3.63%).

Other ventures, like the company's foray into cloud services, could end up being highly successful, as the company takes on both big players -- like Amazon -- and small ones -- like Rackspace Hosting (RAX)alike. Overall, I trust that Page will guide the company in a positive direction.

Though I can't be certain yet, I think Google will likely be in my Core holdings for 2013.  I won't be revealing my picks until late December.  In the meantime, it'd be worth your time to read up on all things Apple.