There are more good news articles, commentaries, and analyst reports on the Web every week than anyone could read in a month. Here are the eight most fascinating ones I read this week.

Falling behind
David Leonhardt of The New York Times gives a depressing overview of middle-class income:

For the first time since the Great Depression, median family income has fallen substantially over an entire decade. Income grew slowly through most of the last decade, except at the top of the distribution, before falling sharply when the financial crisis began.

By last year, family income was 8 percent lower than it had been 11 years earlier, at its peak in 2000, according to inflation-adjusted numbers from the Census Bureau. On average in 11-year periods in the decades just after World War II, inflation-adjusted median income rose by almost 30 percent.

Next leg up
The blog Sober Look shares a report by Moody's on why housing should rebound nicely in the coming decade:

Back in the 1970's and 1980's, many feared that players would become obsolete if and when computers could play chess better than humans. Finally, in 1997, the IBM computer Deep Blue defeated world chess champion Gary Kasparov in a short match. Soon, potential chess sponsors began to balk at paying millions of dollars to host championship matches between humans. Isn't the computer world champion, they asked?

Today, the top few players still earn a very good living, but less than at the peak. Meanwhile, in real (inflation-adjusted) terms, second-tier players earn much less money from tournaments and exhibitions than they did in the 1970's.

Nevertheless, a curious thing has happened: far more people make a living as professional chess players today than ever before. Thanks partly to the availability of computer programs and online matches, there has been a mini-boom in chess interest among young people in many countries. ... In many US cities, for example, good chess teachers earn upwards of $100-$150 per hour. Yesterday's unemployed chess bum can bring in a six-figure income if he or she is willing to take on enough work. In fact, this is one example where technology might actually have contributed to equalizing incomes. Second-tier chess players who are good teachers often earn as much as top tournament players -- or more.

Americans in nearly every age group today are more likely to be obese than those same age groups were four years ago. Obesity is up the most among older adults. For example, 14.4% of 84- to 87-year-olds are obese today, up from 12.2% in 2008. Obesity remains most prevalent in middle age.

Grains of salt
GDP grew 2% in the third quarter. That's not bad. But Dylan Matthews of The Washington Post shows why you should take the number with a grain of salt. The difference between the first estimate of GDP figures and the final number after revisions can be huge: Behind the Dow's rise
Financial advisor and blogger Josh Brown shares some fascinating data from a report by ConvergEx Group on the Dow's rise this year:

These five stocks represent 60% of the Dow's gain this year. The other 25 names are the remaining 40%, but these are the stocks that have the outsized returns (24 to 47% YTD) and sufficiently large stock price to push the Dow Jones Industrial Average higher. Bank of America (NYSE:BAC) is up 68% on the year, but because it is a low-priced stock at $9, its influence on the Dow is just 45 points. 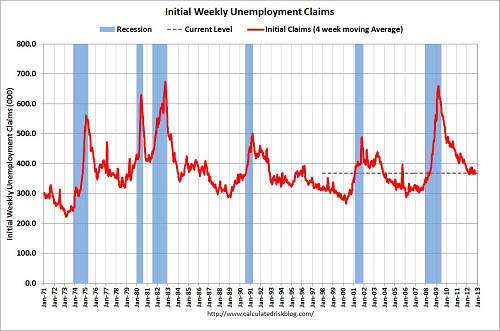