After a spinoff from parent company ConocoPhillips (NYSE:COP) back in April, midstream oil specialist Phillips 66 (NYSE:PSX) posted yet another impressive earnings report. The stock was down today, though, as investors saw the shutdown of its New Jersey refinery and ran for the hills.

By the numbers
Phillips 66 earnings of $2.51 beat analyst expectations by 7%. Much of its success from this quarter resulted from optimizing its refining facilities and acquiring what the company called more advanced feedstocks. For those not completely familiar with oil industry jargon, this means they bought crude oil that is easier to refine. The company netted $1.65 billion in earnings for the quarter, a 110% increase year-over-year. Keep in mind, though, that Phillips 66 was still part of ConocoPhillips this time last year.

During the company's conference call, Phillips 66 CEO Greg Garland addressed some of the recent issues caused by Hurricane Sandy. The company's Bayway refining facility in New Jersey -- the second-largest facility on the East Coast -- was shut down prior to the hurricane, and the company currently is doing an assessment of the facility to get it up and running again. The company has not set a timetable for bringing the facility back on line.

What a Fool believes
It's still early to see whether the Phillips 66 spinoff will benefit both it and ConocoPhillips. If we look at the stock performance of the two companies, though, it seems Phillips 66 drew the winning hand: 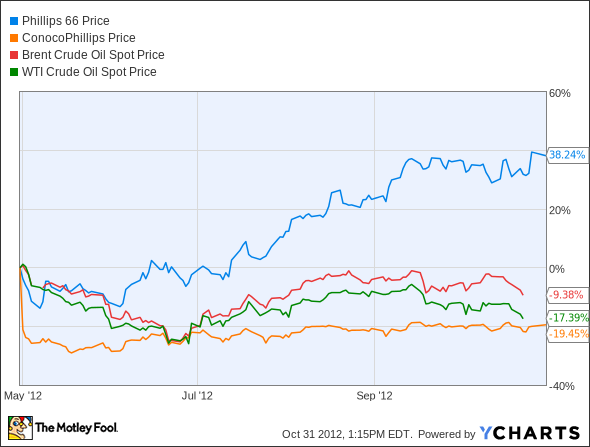 What has made Phillips 66 fare so much better than its parent? By focusing on refining, energy infrastructure, and chemicals, Phillips 66 actually benefits from lower crude oil prices. Many of us have not seen much relief at the pump recently, but crude oil prices are down 10%-15% since the spinoff. This means that Phillips is buying crude at a much lower price, so all those savings go right to the bottom line.

Based on recent moves by the company, it looks set to make a much bigger splash in both the midstream and chemicals sectors. Long term, this will be very advantageous for Phillips. These sectors of the company have much higher margins and are less exposed to oil price volatility. It will take a while, though, for these sectors to make a huge impact on the revenue stream for the company. Both midstream and chemicals accounted for less than 5% of total earnings for the quarter.

From an investor's standpoint, Phillips 66 appears to have a bright future. If there was no critical damage to the Bayway refinery, then the plant should be up and running within a couple of weeks. Anyone who is pulling out of Phillips 66 because of the storm is not looking at the long-term potential of this company. Phillips looks like a solid buy, and I will be putting out an outperform rating on CAPS to keep me honest.