Trading at an even-Steven $1 per share, the stock has plunged 65% over the past year and a blood-curdling 89% in five years. The American depositary shares trading on the NYSE may not feel much heat from short sellers -- less than 1% of the ADRs are sold short -- but it's a different story in Alcatel's hometown.

Financial-data provider Markit says that Alcatel Lucent is the most heavily shorted stock on the Paris market. Short interest here jumped 25% over the past month alone, and a massive 16% of the shares underpinning our ADRs have been borrowed and sold short. The average European stock sees about 11% of all shares available for borrowing actually turning into short sales; For Alcatel, 87% of available shares are betting on further falls. 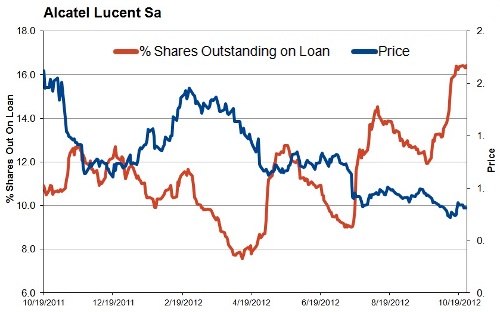 This snapshot of Alcatel's short interest was taken just before last week's earnings report. The stock traded way up in the hours leading up to the report, only to plummet on the actual news. Sales fell 2% year over year, or 10% if you adjust for currency fluctuations. The company burned through more than $600 million of cash on its way to a $0.06 loss per share, and Alcatel is running out of money to torch.

The French bears were proved right again. A few short sellers in Paris might cash in their chips at this point, but many will let their bearish bets ride in search of even greater profits.

But what if Alcatel had totally crushed analyst estimates? Weak reports from rivals Cisco Systems (NASDAQ:CSCO) and Juniper Networks (NYSE:JNPR) certainly left the door open for a strong showing. That's sometimes a sign that the market winds are shifting, and Alcatel could have been on the pleasant end of that change. Would a short squeeze in France have moved the American ticker, too?

Where the market makers go
I don't think so. You see, Paris may be the stock's main market in a technical sense, but it's far from the real trading center. This concept is best shared in song: 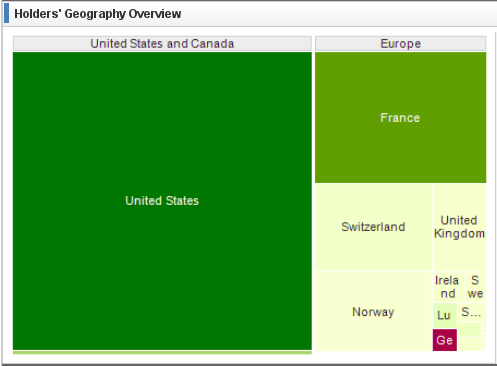 ... but I guess an infographic will have to do. French investors own just 10.4% of Alcatel's share float, and most of the market action happens here in America.

But don't depositary shares follow their underlying stock prices in absolute lockstep? If the French stub jumps, the American paper should follow. Right? 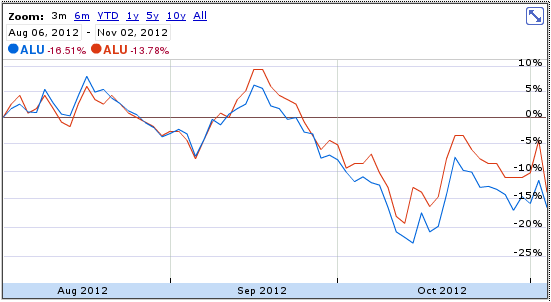 ADR shares generally do follow their parent stocks pretty closely ,since they both track the same fundamentals. Your analysis of Alcatel should be the same whether you're doing it in a New York office or at a sidewalk cafe in Paris. But nobody's forcing you to buy the ADR at inflated prices just because there's a short squeeze going on in Paris. The gap between European and American price moves can be quite large.

So if you were hoping for a massive jump in Alcatel's ADR prices as short sellers were forced to liquidate their holdings, you're betting on the wrong horse.

Better bets
The short-selling spring is barely loaded behind Alcatel Lucent. Local short interest of 0.8% would hardly make a dent in the stock price even if every bearish position was liquidated at once. You might want to look instead at communications technologist Pitney Bowes (NYSE:PBI), betting that the 90-year old company can transition into digital tools as its largest customer, the U.S. Postal Service, fights for its life. Or maybe you'd prefer InvenSense (NYSE:INVN), a maker of motion tracking chips for smartphones and video-game systems. That's a five-star CAPS stock that the Fool has bought in two different newsletter portfolios.

Both of these stocks have more than 30% of their float sold short right now. It would take three weeks' worth of InvenSense's average trading volume to fully cover that negative bet, or four weeks for Pitney Bowes. These short-squeeze bets make a lot more sense than Alcatel, assuming that you believe in each stock's bullish thesis.

All that being said, I recently ended a long-running thumbs-down CAPScall on Alcatel Lucent because I like the way the company hopes to invent its way out of this tough situation. It's an extremely risky stock, and those French bears may still get the last laugh, but you don't need a short squeeze to make massive profits if this troubled networking specialist ever makes a full recovery. In other words, don't pour a second mortgage into this stock, but a small, speculative bet could make sense if you like to live on the wild side.