Pharmaceutical giant Merck (NYSE:MRK) has been developing drugs for nearly a century and is one of the few health-care components in the Dow Jones Industrial Average. It may seem like every company listed in the Dow is a safe, long-term investment -- but this isn't always the case.

Merck, for instance, recently lost marketing exclusivity for its top-selling drug, and the company may face more headwinds from the patent cliff in the coming years. Is Merck still a solid dividend stock, or are there too many risks facing this drugmaker?

In our brand-new premium report, our senior biotech analyst walks you through the opportunities, threats, and more in-depth analysis on Merck. Here's a small sample of what you'll find inside:

The opportunity
Merck is the second largest pharmaceutical company by revenue behind Pfizer (NYSE:PFE). Johnson & Johnson (NYSE:JNJ) has greater revenue as well, but it's more of a conglomerate since it sells medical devices and consumer products like Band-Aids in addition to drugs. Merck is primarily dependent on drugs for its revenue. 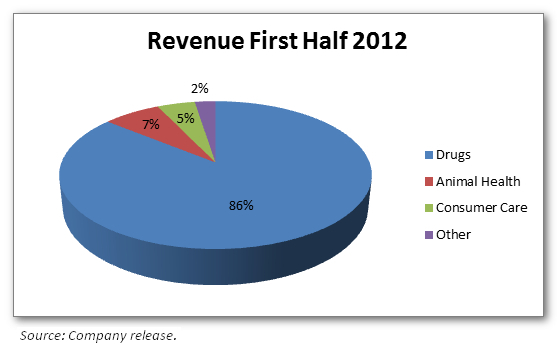 Pharmaceuticals and vaccines make up the bulk of Merck's revenue. This segment is somewhat diversified; sales of the top 10 drugs make up just over half of the total revenue. 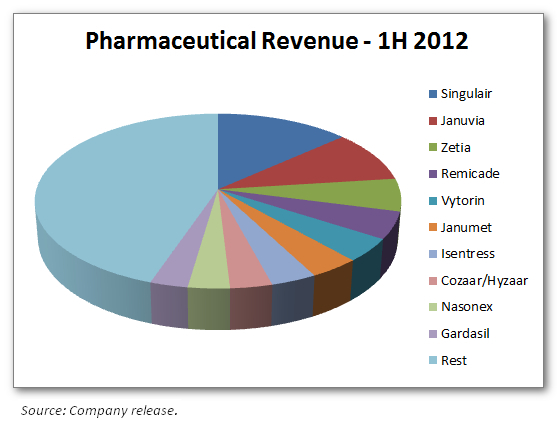 Asthma drug Singulair, which contributed more than 13% of the pharmaceutical revenue in the first half of 2012, went off patent in the U.S. last August. Merck will lose patent protection in major European markets in February. The loss of exclusivity will instantly hurt sales, but other drugs have the ability to make up for the decrease. Sales of diabetes drugs Januvia and Janumet rose 30% and 28%, respectively, in the first half of 2012 compared with the same period a year prior. Revenue from HIV therapeutic Isentress was up 17%.

That's the advantage of having such a diversified stable of drugs to sell. The disadvantage is that it's difficult for any one drug to significantly drive sales, because the drug becomes muted by the large total revenue.

Growth in the low single digits when Merck is facing tough year-over-year comparisons because of patent expirations and generic competition seems reasonable, while drug revenue growth should be higher in quarters where patent-cliff headwinds are absent.

The rest
Beyond drugs, Merck has opportunities in animal health and in consumer care, which includes over-the-counter drugs as well as consumer products, like Coppertone sunscreen. The gross margins for both groups are likely lower than for prescription drugs, which is fine given their relatively small contribution to the overall revenue.

Finally, there's the "other" category, two-thirds of which is Merck's alliance with AstraZeneca (NASDAQ:AZN) to market Nexium and Prilosec. Unfortunately, that revenue will probably disappear because AstraZeneca has an option to buy out Merck's portion of the joint venture in 2014.

Global domination
Like most big pharma companies, Merck has made no secret of the fact that it plans to increase sales by expanding into developing countries. The U.S., Europe, and Japan still dominate pharmaceutical sales, with about 79% coming from those three regions. Developing countries like China, with sales up 23% in the first half of 2012, are helping to drive sales further.

We hope you enjoyed this sneak peek at our new premium research report on Merck. To get more in-depth information on this stock -- including reasons to buy and sell -- click here today to learn more.