Hunkering down for a profitable journey with one of the industry's top management teams.

After visiting this miner's operations in Mexico's legendary Guanajuato silver district just over one month ago, I began to explain to my readers why I intend to hold my shares of Endeavour Silver (EXK -4.80%) "through a $20 share price and even well beyond." The following discussion is a continuation of that ongoing effort.

As the array of meaningful challenges that the company anticipated from its ambitious turnaround plan for El Cubo continue to weigh upon the shares, the entry point for such a profitable long-term journey has only grown more attractive. Endeavour reported adjusted net profit for the third quarter of $1.7 million, representing a sharp decline from the prior-year mark of $8.9 million. Although average ore grades at El Cubo continue to improve steadily over the heavily diluted grades reported under the mine's prior operator -- AuRico Gold (NYSE: AUQ) -- the turnaround has suffered a "slow start" in the early going that forced Endeavour to lower 2012 production guidance from El Cubo by a fairly substantial margin.

With El Cubo's contribution now forecast to total about 750,000 silver-equivalent ounces (SEOs) from the acquisition's closing date through the end of 2012, Endeavour anticipates consolidated 2012 production of 4.6 million ounces of silver and 38,000 ounces of gold (or 6.5 million SEOs converting gold at a 50:1 gold-to-silver ratio). Impressively, following a 7% improvement in cash costs to reach $4.70 per ounce, Endeavour sees full-year costs coming in near the low end of prior guidance for between $6 and $7.

Lots of silver and gold waiting to be sold
I believe it is crucial for investors to understand that silver and gold ounces equating to 20% of that entire projected production volume for 2012 was, as of Sept. 30, held in inventory! That precious inventory consisted -- in roughly equal parts -- of either sales-ready bullion held back deliberately in anticipation of higher silver prices to come, and of concentrate that is already in process on its way to becoming silver-gold doré. That combined inventory -- it's worth noting -- has the capacity to generate some $40 million in sales at current prices. Pictured below is a portion of the El Tajo plant, acquired with the El Cubo assets, where Endeavour converts Guanajuato-area concentrate into silver-gold doré. A portion of the sprawling El Tajo plant acquired with the El Cubo acquisition, where Endeavour Silver will invest $24 million to refurbish the existing leaching, filtration, Merrill Crowe, and refining circuits -- and build new crushing, conveying, grinding, and floatation circuits -- for an initial plant capacity of 1,200 tons per day . Photo by Christopher Barker.

Digging deep for Foolish perspective
Shortly, I'll be visiting First Majestic Silver's (AG -5.50%) recently acquired La Guitarra mine, and its emerging flagship Del Toro mine, and I encourage readers to bookmark my article list or follow me on Twitter in order to track my ongoing analysis. During 2011, I inspected Fortuna Silver Mines' (FSM -5.05%) San Jose mine in the southern Mexican state of Oaxaca, and caught my first glimpse of Endeavour's now-completed expansion of the Bolañitos mine complex. These perspective-gathering trips, like my recent return trip to Endeavour's Guanajuato-area operations, offer phenomenal opportunities to enrich investors' understanding of these exciting silver growth projects as they each unfold. Meanwhile, The Motley Fool has made available my just-completed, premium research report covering Goldcorp (GG), in which I discuss in some detail one of the greatest growth stories unfolding in the gold industry.

During my recent visit to Endeavour's Bolañitos and El Cubo mines, I became convinced that the company's eventual success at transforming the previously mismanaged El Cubo mine into a tightly run, Endeavour-style operation would provide the next major catalyst for the shares, and bring a $20 longer-term price target into closer view. Endeavour CEO Brad Cooke and his first-rate management team understand full well the gargantuan nature of the undertaking, and I remind investors to retain a disciplined, long-term focus in the face of any near-term shortfalls or setbacks that may occur along the way. With that in mind, let's take a moment to review some of the key takeaways from my recent site visit.

After transiting key portions of the vast underground workings at El Cubo with Endeavour's hands-on CEO -- and seeing firsthand how the company's new mine plan and adaptive mining methodologies are poised to drive major improvements over time to the operation's safety, average ore grades, productivity, and predictability -- I am content to wait patiently while the company unlocks shareholder value for these acquired assets that is not presently reflected in the stock. 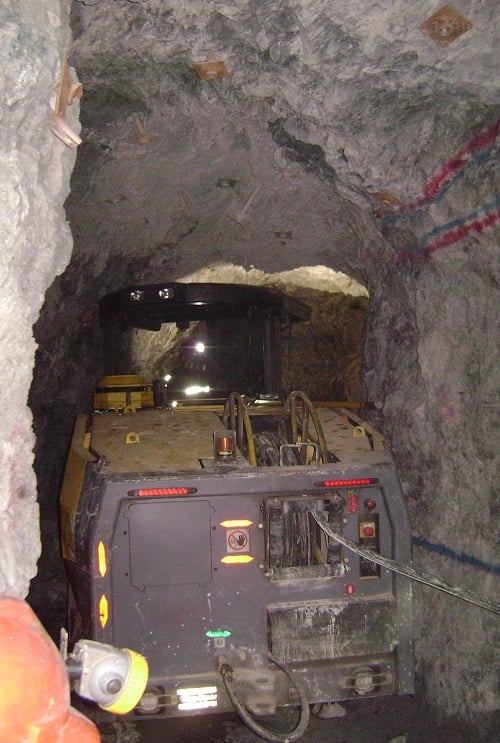 Right-sizing in action. Here on the 2250 level of the Dolores vein at El Cubo, the average vein width of 1.5 meters beckons an adapted approach that Endeavour has already put into action (where appropriate) since acquiring the mine. To extract the economic material without diluting the grade with sub-economic material, Endeavour has brought in some smaller equipment to progress stopes that are only as wide as they have to be. Photo by Christopher Barker.

After standing with Barry Devlin, Endeavour's vice president for exploration, atop a commanding promontory overlooking the "Villalpando Gap" -- a striking four-kilometer expanse of unexplored territory along the nine-kilometer strike length of the El Cubo's "most continuous and most productive vein system" -- I have every confidence that Endeavour's highly successful exploration team will add considerable mine life to El Cubo through the wholesale expansion of existing silver and gold reserves. 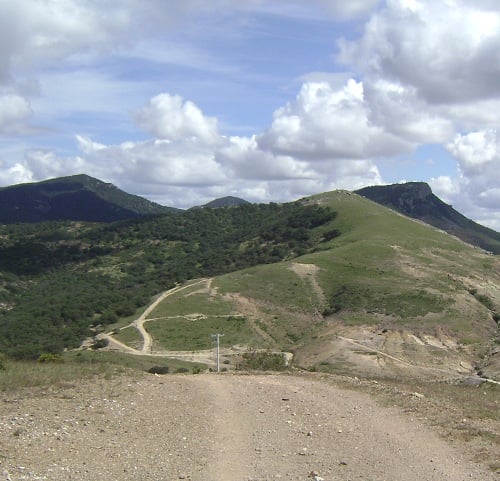 Stretching several kilometers in the distance along the known mineralized structures at El Cubo, priority exploration targets include the large and unexplored Villalpando Gap, Cebolletas, and Asuncion. Photo by Christopher Barker.

And finally, at Bolañitos, after Endeavour President Godfrey Walton led our group over a mound of recently blasted rock to inspect an in-situ portion of high-grade ore within the newly discovered Lana vein, I knew that all the pieces were in place for mine production to match the 1,600 ton-per-day throughput capacity of the processing plant. 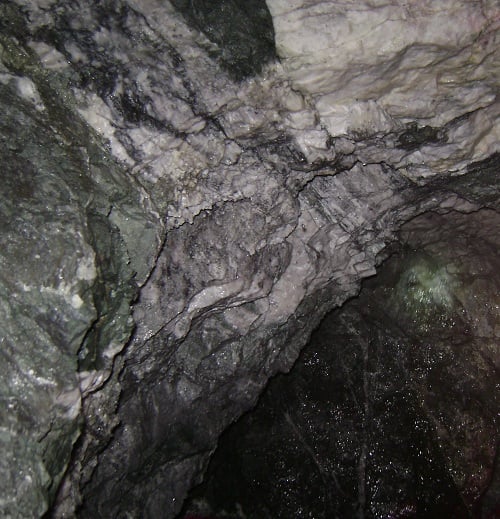 Mere hours after the first crosscut tunnel broke through into the mineralized structure, we were among the first people to view this high-grade silver-gold vein in-situ. The Lana vein has already been traced over a strike length of 750 meters, and remains open for extension, with recent drill results featuring 2,300 gpt silver and 7.1 gpt gold over 0.5 meters. Photo by Christopher Barker.

I've maintained my bullish CAPScall on shares of Endeavour Silver since mid-2007, scoring a 68% advance even with the recent pullback from double-digit territory. I have remained a delighted shareholder all the while, and I look forward to holding my stake at least until $20 per share is in the rearview mirror. Accordingly, I will continue to view any single-digit share price for Endeavour as a striking opportunity to increase my holding, and I encourage Fools to continue digging-deep into this well-run miner's terrific organic growth potential.