Not all graphs are better when they go "up and to the right." Unemployment, debt, and frequency of stabbings are a few statistics that would be better heading down and to the right. And some numbers are even better just heading straight and to the right, like the number of tires on your car or, perhaps more importantly, global temperatures. Humans have thrived in current climates, and odds are that the status quo is better than any potential alternative -- for both your health and the world economy.

Unfortunately, things will probably be getting hotter -- and hotter than we might have hoped.

Bleak outcomes
According to a recent PwC report (link opens PDF), the world will blow past its target of only a two-degree Celsius increase in global temperatures that was agreed upon in Copenhagen in 2009. In fact, we may even raise temperatures by 6 degrees Celsius -- more than 10 degrees Fahrenheit. How come?

Because, in order to limit the average global temperature increase to two degrees Celsius, the world must have an average annual rate of decarbonization -- i.e., decreasing carbon intensity -- of 5.1% through 2050. Carbon intensity is measured by carbon dioxide per unit of GDP. And we are far from achieving anywhere near that level of decarbonization.

As the report states, "The decarbonisation rate required ... has not been achieved in a single year since World War 2." The world as a whole decreased carbon intensity by 0.7% this past year and only decarbonized at an average rate of 0.8% since 2000. Even at an annual decarbonization rate of 1.6% through 2050 -- double the rate of the previous decade -- the average global temperature will likely rise six degrees Celsius.

The implications of rising temperatures
According to The Guardian, "Two degrees is also enough to cause the eventual complete melting of the Greenland ice sheet, which would raise global sea levels by seven metres." That means oceans would be 23 feet higher, dwarfing the 14-foot storm surge that Hurricane Sandy hurled at New York City, flooding the subway and blowing transformers. "Three degrees alone would see increasing areas of the planet being rendered essentially uninhabitable by drought and heat." And we're on track for six degrees?

Investment manager and founder of GMO Jeremy Grantham has warned of another potential issue that could be exacerbated by drought and floods: a global food crisis. With an increasingly crowded world that is expected to have more than 9 billion people by 2050, it is estimated that food production will need to increase by 70%. And while supplies are stretched, the high prices of basic foods will continue to cause discontent: 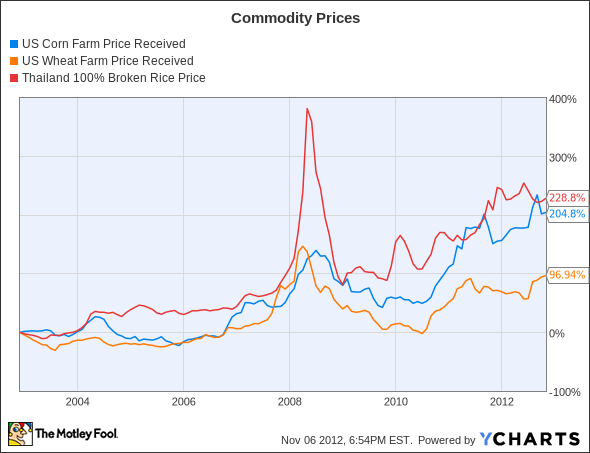 Even though some blame investor interest in commodity futures for price spikes, increased demand and production hurt by droughts have definitely affected crop prices.

Hot-world investing
So if the earth is going to be hotter -- and either wetter or drier, depending on where you live -- where can you put your portfolio, such that it goes "up and to the right"?

One might look into the stocks that climate activist Al Gore's Generation Investment Management has invested in:

Alternatively, Grantham recommends a portfolio made up of at least 30% resource stocks and high-margin businesses that wouldn't be hurt by higher commodity prices. Some examples include Sociedad Quimica (NYSE:SQM), which mines chemicals that are used in fertilizer, as well as iodine and lithium; or Adecoagro (NYSE:AGRO), which manages a variety of crops like rice, sugar, and coffee, as well as cattle, ethanol, and land.

You can also identify your own companies that have a solid plan for sustainability given any number of future environmental scenarios. As one study found, the returns from sustainable companies beat their unsustainable peers by 4.8% annually from 1993 to 2010. Forward-looking companies won't worry about boosting near-term profits at the expense of longer-term goals, which works in the long-term investor's favor.

Optimistic or pessimistic
Grantham says of the food crisis, "We are badly designed to deal with this problem: Regrettably we are not the efficient species of investment theory, but ill-informed, manipulated, full of inertia, and corruptible.

And it seems the PwC report takes the same grim outlook:

Any investment in long-term assets or infrastructure, particularly in coastal or low-lying regions, needs to address more pessimistic scenarios. Sectors dependent on food, water, energy or ecosystem services need to scrutinise the resilience and viability of their supply chains. More carbon intensive sectors need to anticipate more invasive regulation and the possibility of stranded assets. ... Either way, business-as-usual is not an option.

Unfortunately, it appears the world has yet to fully realize the potential threats and will carry on with "business as usual" until the consequences are in plain view.