In case you haven't noticed by now, smartphones are kind of popular right now. Wait, scratch that. Smartphone growth is exploding. Meanwhile, the PC market has become mature and somewhat saturated and simply isn't the poster child of growth that it used to be.

As the dominant supplier of PC chips, Intel (INTC 1.27%) got rich providing processors during the rise of the PC. As the dominant supplier of smartphone chips and technology, Qualcomm (QCOM 2.10%) is getting rich providing the chips and IP during the rise of the smartphone. In many ways, these two heavyweights embody the growth prospects in the markets they dominate.

Pass the crown
This storyline has now culminated in the fact that Qualcomm has just now overtaken Intel in market cap for the first time ever, driven by its strong earnings report last night. 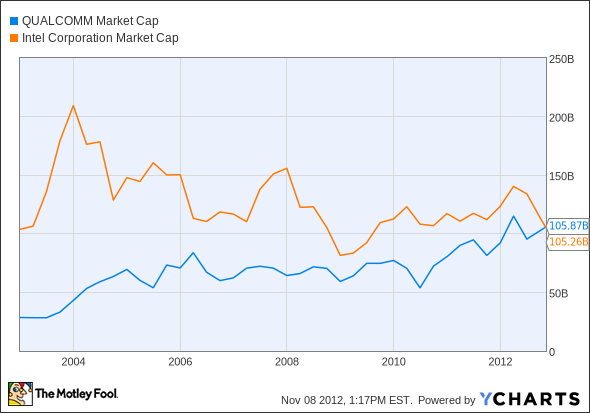 That's a major milestone that symbolizes where consumer demand is shifting. Qualcomm is now the largest semiconductor company in the world by market cap. We can even add in estimates on each of these markets for the third quarter to really drive the point home.

The shift in spending to smartphones isn't exactly a zero-sum game, though, since computers and smartphones are highly complementary. One big difference is that smartphones have shorter upgrade cycles, with consumers typically getting new phones every two years when their service contracts are up. PCs typically last a bit longer before consumers feel the itch to upgrade.

That's also not to say that Intel isn't benefiting at all from smartphone adoption, since smartphones tap into cloud infrastructure, and data center growth benefits Intel. However, there's less upside there for Intel, as its data center segment comprised just 20% of sales last quarter, vastly overshadowed by the 64% of sales that the PC client business brings in.

A tale of three markets
The chip giants are going to increasingly cross swords in the future. Intel continues to try to work its way into smartphones with its mobile Atom processor. It's partnered with Google (NASDAQ: GOOG) to optimize Android for its chips, even as many popular Android devices run Qualcomm Snapdragon processors. In the market for smartphone processors, Qualcomm boasts a 48% revenue share, while Intel has just a 0.2% unit share.

As much as Intel is trying to crack into smartphones, Qualcomm is also now set to crack into PCs. With Microsoft's (MSFT 1.12%) decision to support ARM-based (NASDAQ: ARMH) architecture in Windows RT, Qualcomm has an opening to power some of the next generation of Windows tablets and convertibles. The company has less of a presence in tablets, with NVIDIA (NVDA 5.08%) showing particular strength in that form factor, but Windows RT represents a lot of key opportunities for Qualcomm.

Microsoft is also an important partner on the smartphone side, since its Windows Phone platform runs exclusively on Snapdragon chips. Intel and NVIDIA can't get in there, although that's currently not a high-volume platform.

Intel has a much stronger position in the cellular baseband modem market than in mobile applications processors. Intel completed its acquisition of Infineon's wireless unit early last year, in order to bolster its cellular offerings. Intel now ranks as the No. 3 player in the baseband market, grabbing 12% revenue share in the second quarter, according to estimates by Strategy Analytics.

As top dog, Qualcomm took home a 50% slice. Intel's figures were boosted by 2G and 3G shipments, while Qualcomm benefited from 3G and 4G basebands. NVIDIA also wants in on basebands, acquiring Icera last year, and plans to integrate cellular connectivity into its chips just like Qualcomm.

Between mobile processors, PC processors, and cellular baseband modems, Qualcomm and Intel will continue to find themselves competing for key design wins.

The new Intel
The PC's growth days are now in the rearview mirror. The smartphone's growth days are just now beginning, and Qualcomm dominates two out of the three aforementioned markets where it will see increasing competition from Intel and NVIDIA.

Qualcomm is the Intel of the smartphone era.