The undisputed king of fast food isn't looking so regal these days.

McDonald's (NYSE:MCD) golden arches have taken on a bit of a double meaning. To customers, they project a clear message: stop here for affordable, convenient food. To investors, the message has been just as enticing: invest here for strong growth and consistent profits.

But those consistently high returns don't look like such a lock right now. McDonald's saw "broad based softness" last quarter, and pointed to big headwinds that hurt revenue and profitability at the fast food juggernaut. CEO Don Thompson called the tough operating environment "a new normal," suggesting that investors could be in for more pain ahead.

How we got here
Let's be clear on this from the start: McDonald's rakes in the gold like very few companies can. The global franchisor books some of the highest operating margins in the restaurant industry -- or any other industry, for that matter. The company is a regular compounding machine, too. Return on invested capital has been tracking at near 20% for years. 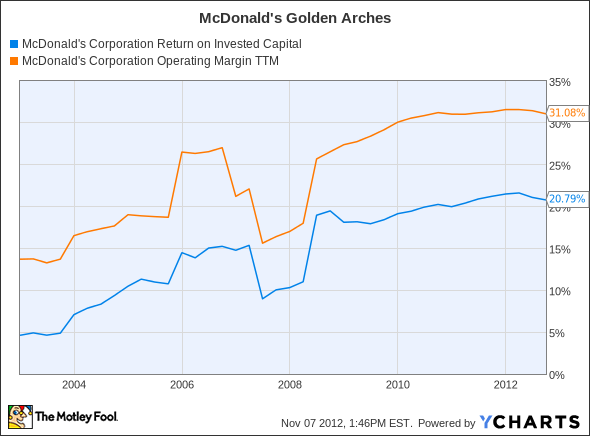 McDonald's sales growth has also been impressive, until just recently. Comparable sales for the fast food king were up about 4% in 2009, 5% in 2012, and nearly 6% last year. The company's high-low strategy -- of offering compelling value items paired with a strong range of premium options -- has been working like a charm. Customers might come in for the cheap Chicken McNuggets, but they tend to splurge on a McCafe drink, too. The result has been balanced growth, with contributions from both average check increases and higher traffic levels.

Yet, the last few quarters have shown an unhappy trend of falling sales growth. Here are the company's last four quarters of sales:

And the trend hasn't stopped there. McDonald's gave investors an unwelcomed peek of Q4 so far, saying that, "October's global comparable sales are currently trending negative."

Where we're headed
In its Q3 results, management highlighted three trends working against the company right now: weak consumer sentiment, rising costs, and more competition. Lets take a quick look at each of those issues.

First, consumers are increasingly value-conscious, leaving McDonald's little room to raise prices and benefit from those increasing margins. In fact, the trend's been cutting in the opposite direction, with operating profit down 1.3 percentage points, thanks to the focus on heavy promotion of value options. At the same time, the company is seeing a brutal cost pinch, as input prices rose 2% in the quarter, and labor costs ticked up again. The company expects even higher commodity costs in Q4, but sees inflation tailing off next year.

Competition is also heating up. Yum! Brands (NYSE:YUM) has had loco success recently. That's been powered mostly by Taco Bell, but all three of its major brands -- Taco Bell, KFC, and Pizza Hut -- reported growing sales, margin, and profit in Q3. On a consolidated basis, the company reported a scorching 6% comparable sales gain in the quarter, even beating out Chipotle (NYSE:CMG), which only managed 4.8% growth. Even Wendy's (NASDAQ:WEN) is feeling flush. The company's results were helped along by successful new menu options, to the point that Wendy's has accelerated its own expansion plans.

Foolish bottom line
While Thompson is absolutely right to call that a tough environment, I think these are short-term problems that the company will work through over the next few quarters. Cost inflation promises to be less of a pain next year. And McDonald's traffic-boosting strategy, while hurting profits now, should pay off once the economic environment for consumers improves. As for competition, the company has battled in this hyper-competitive industry for decades, and has managed to book industry-leading margins. I see nothing about the current challenge that McDonald's can't adjust to.

As a shareholder, I'm bracing for what looks set to be a tough few quarters, followed by a return to expanding revenue and profits. And, with shares paying a 3.5% annual yield, I don't mind waiting around a while as the company works through these challenges.