Gaming results are in, and the one big shocker is the general disappointment of Las Vegas Sands (NYSE:LVS). The world's largest gaming company is still a steady performer in Macau, but Singapore is underperforming expectations by a long shot and the stock has moved sideways as a result.

To make matters worse, competitors are trading at lower multiples and have more impactful growth projects on the horizon. This stock simply isn't what it used to be. Don't believe me? Take a look at Las Vegas Sands' returns versus the S&P 500 (SNPINDEX:^GSPC) over the past two years. 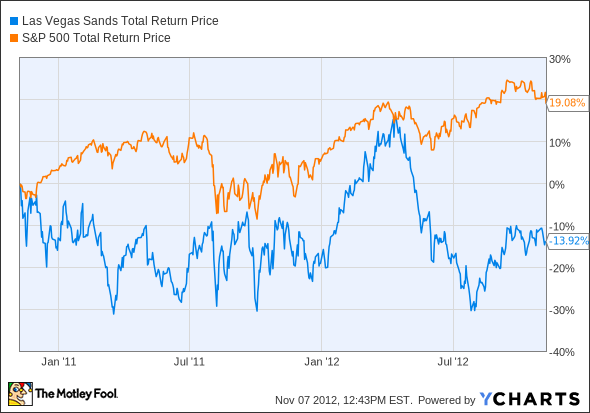 Problems in Singapore
Marina Bay Sands was supposed to be the most profitable casino resort in the world, and for a period of time it raked in cash for Las Vegas Sands. Yet recent performance at Marina Bay Sands shows not only a halt to growth, but results that are starting to decline rapidly. Casino revenue was down 27.8% in the quarter, food and beverage revenue was down 6.3%, and convention, retail, and other revenue fell 19.4%. Even with an increase in room and mall revenue, overall revenue fell 21.1% in the third quarter to $625.5 million.

The biggest number that raises a red flag in Singapore is rolling chip volume. This is the volume of play high-rollers gamble, and this volume declined by 29.5% in the third quarter. While win percentage will fluctuate quarter to quarter, volume tells you what direction overall gaming is headed in, and it's in a serious decline.

Add all of this up and you can see that EBITDA is headed in the wrong direction in Singapore. 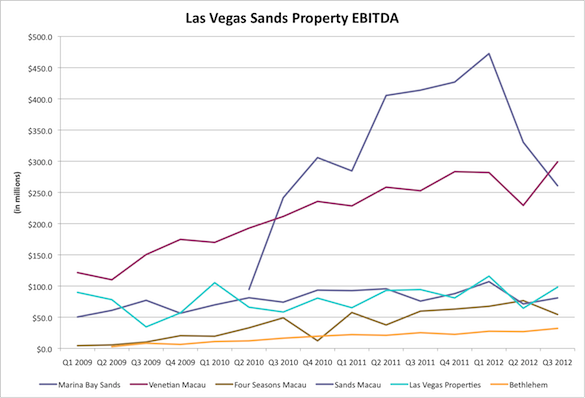 It's a good thing that Macau hasn't gone through the same decline.

Macau holds steady
The chart above shows that operations in Macau have been steady over the past 12 months. In its recent quarterly release, the company touted an increased market share in Macau of 19.3% from 14.3% a year ago. This shouldn't come as a surprise since Las Vegas Sands opened Sands Cotai Central in the past year, so it should see an increase in market share as a result.

Sands Cotai Central is the big question mark in Macau. The resort opened the second phase of a three-phase opening at the end of the quarter, so it's hard to assess the impact on results. The first phase generated just over $50 million of EBITDA, which wasn't anything to write home about. I've built in $1 billion in EBITDA from this property in prior valuation models, and we have yet to see if it will meet or exceed that target.

Once fully open, Sands Cotai Central will be one of Las Vegas Sands' three most profitable properties and will hopefully live up to expectations. The challenge is that high expectations are already built into the stock.

Not the best value in gaming
The challenge for investors is that the market has already priced in all of Las Vegas Sands' growth opportunities in the near future. The enterprise (including debt and equity) trades at 11.2 times trailing EBITDA at current levels, and if we project $1 billion in annual EBITDA for Cotai Central, the multiple drops to 9.0 times.

This is at the high end of what I might pay for a gaming stock, but it's also exactly the same multiple that Melco Crown (NASDAQ:MLCO) and Wynn Resorts (NASDAQ:WYNN) trade at. The difference is that we have results in the bag for these two companies, and at Las Vegas Sands we're projecting future results that may not come true.

There are also growth opportunities to consider. Each of these three companies, along with MGM Resorts (NYSE:MGM) and SJM, has a resort on Cotai in the works, and Melco Crown is also part-owner of a resort in the Philippines. But the impact of a Cotai resort on Wynn and Melco Crown, which are both much smaller than Las Vegas Sands, will be much higher than it is on Sands.

So if valuation is a tie, then growth breaks the tie and Las Vegas Sands falls behind.

Foolish bottom line
If you think that Singapore's troubles are short-term and that Cotai Central will exceed $1 billion in annual EBITDA in the near future, you may be able to see value in Las Vegas Sands' shares. Personally, I'd rather bet on the results we've already seen and stick with competitors Melco Crown and Wynn Resorts. The bottom line is that the shine has long left Las Vegas Sands.