The fiscal cliff is coming, and our elected officials will spend this year's lame duck session finding ways around it. The Dow Jones Industrial Average (DJINDICES:^DJI) has plunged nearly 3% since Tuesday's elections, in large part because neither Democrats nor Republicans gained control over all three levels of government. For the next seven weeks, this issue is likely to get more column mileage than any other government matter.

So let's debone this thorny notion a bit.

What is this fiscal cliff, anyways?
Coined by Federal Reserve chairman Ben Bernanke last February, the "fiscal cliff" trope refers to an avalanche of federal cost-cutting and tax boosts scheduled to occur at the start of January, 2013. By doing nothing and allowing current laws and regulations to take effect or expire as scheduled, federal tax revenues will spike while spending drops drastically.

But nobody actually wants this to happen all at once. Higher taxes would sap capital out of consumers and businesses while the spending cuts ensure that the extra cash isn't put back into circulation. Liberals and conservatives agree that the economy would suffer -- which, in the long run, would reduce the budget-balancing benefits of taking this drastic leap.

It's kind of like having conservatives design the spending side of the fiscal budget with taxation under liberal control. Some would call it the worst of both worlds. That's why we have a colorful metaphor to describe this phenomenon, along with a wholesale panic across the congressional aisle over attempting to avert it.

Alternatives
So what if we just extend current policies again, like we did six months ago? Here's what we'd get: 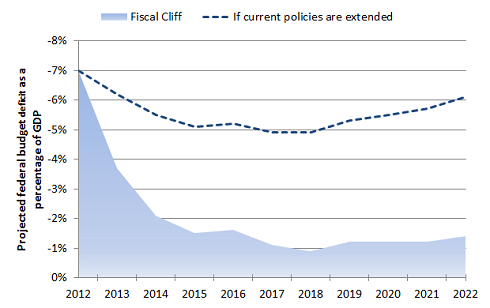 The budget deficit would remain sky-high, but the economy would keep ticking along. Is that a fair trade?

Well, the alternative budget wouldn't be so bad if our national debt wasn't astronomically high. Consider these dueling trends: 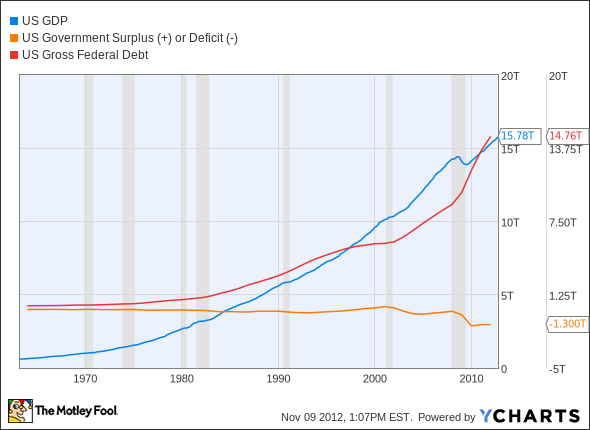 With debt balances this high, the government spends a ridiculous amount of incoming tax revenue on interest payments. The Fed can always issue more bonds to cover that expense, but that only adds to the long-term problem. At some point, we'd be staring down the barrel of a runaway inflation bazooka that would make Brazil's hyperinflation of the 1990s sound like a lullaby.

So, as unappealing as the do-nothing cliff scenario might look, the polar opposite clearly isn't much better.

And it's not like our major political parties agree on how to fix this mess. A wholly Democrat congress would attempt to solve this crisis by spending more money in an attempt to pump tax revenue back into the economic system. Republicans would prefer leaving some tax money on the table. Neither side will get its way given the election results.

That's why we need Congress to work up one of those Grand Bargains by the end of the year -- a bipartisan compromise that strikes a reasonable balance between fiscal discipline and economic growth.

Whose money is it, anyway?
I think it's important to remember who the government owes this $15 trillion to -- it's mostly to American people and businesses.

No, we're not selling the nation to China or India. The foreign-owned portion of our government bonds is rising, but so is the much larger domestic portion: 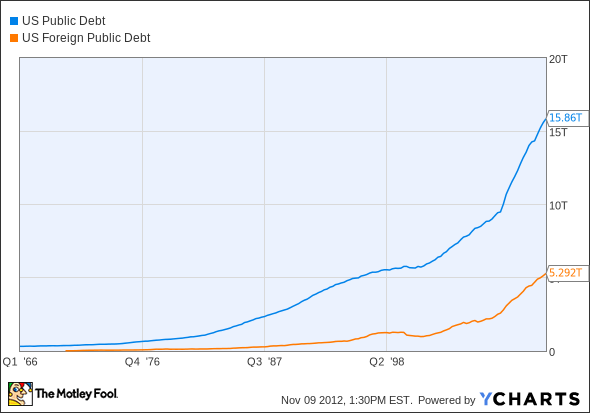 US Public Debt data by YCharts.

Knowing this might change how you think about national debt. Paying down the debt essentially means buying back Treasury Notes of various kinds. We, the people, hold most of that debt. In that light, the horrific "alternative scenario" might not be so scary after all. As long as we keep raising the debt ceiling to avoid defaulting on interest payments, there might not be an inflation crisis at the end of the tunnel.

That opens a whole 'nother can of worms, but at least it gives our freshly elected government some time to work up a better plan. Will they strike an accord in 2012, or just push the issue another six months down the road? Hard to say, but the final answer is important.