Shares of OLED specialist Universal Display (NASDAQ:OLED) hit a 52-week low yesterday. Let's look at how it got here and what's in store for the company.

The big news yesterday was that Universal Display reported a very disappointing third quarter. Shares got crushed by 33% after the company said it only generated revenue of $12.5 million. That was dramatically worse than the consensus estimate of nearly $19 million. The company also surprised investors by reporting a net loss of $0.12 per share. Shareholders were expecting a profit of a nickel per share.

Worse yet, Universal Display had to cut its full-year revenue guidance from a prior range of $90 million to $110 million to just $80 million to $82 million. That was a quick change of heart, as the company had just raised guidance the quarter before.

One of the big culprits to the shortfall was that top customers Samsung and LG Display (NYSE:LPL) were planning on shipping a bunch of OLED TVs, but that didn't pan out as hoped, likely because the prices of OLED TVs remain prohibitively high for the average consumer. Now, Universal Display is sitting on a bunch of unsold inventory. Those OLED TV plans aren't shot altogether, though -- just delayed. For example, LG is still building its new OLED TV factory that will be able to churn out 180,000 panels per month.

It was a weak quarter any way you slice it, which is why Universal Display now trades at fresh lows.

How it's doing
Shares now trade near two-year lows. 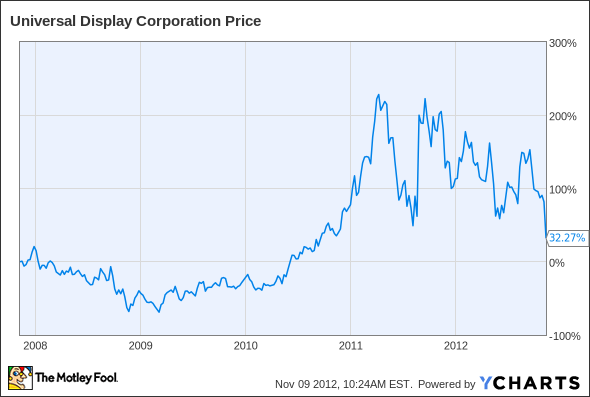 We'll also add some more fundamentals from the trailing-12-month period to dig deeper.

With such high valuation multiples, shares are prone to their fair share of volatility, and this earnings miss is a testament to how painful that can be as growth prospects are called into question. Universal Display has always been a long-term bet.

What's next?
OLED displays continue to show up in smartphones, but those devices alone can't provide the OLED growth that investors crave. Universal Display still needs OLED TVs and lighting to take off.