One of the biggest overhangs on Apple (NASDAQ:AAPL) shares over the past seven weeks has been the fear that iPhone 5 shortages would plague the company and hold back top-line results. After all, it was exactly seven weeks ago today that shares hit all-time highs on the day the newest model was released to the masses. The stock now trades about a 25% lower than it did back then.

iPhone 5 shortages are the most legitimate reason for investors to be remotely pessimistic in the short term. It looks like those shortages are easing now, though. While Apple's web site continues to quote shipping times of 3 to 4 weeks on new orders, several analysts are reporting that inventory at Apple stores is improving.

BTIG Research analyst Walter Piecyk even believes that supply and demand for the iPhone 5 are "almost in balance." Piecyk believes that the long shipping times are quoted because Apple is trying to encourage customers to use its new Personal Pickup service, where buyers order online and pick up their purchase at a local Apple store the next day. That leads to faster delivery while bringing customers into stores (boosting some of the traffic metrics that Apple tracks) and also provides an opportunity for them to potentially be upsold on accessories or even more gadgets.

That coincides with my own personal experience. I recently bought an iPad Mini, and I was quoted an online shipping time of 2 weeks, but by choosing local pickup I was able to have my shiny new toy in my hands the very next day. Apple's website updates its inventory nightly and buyers have a good shot at finding inventory locally and not having to wait weeks on end.

Survey says
Judging supply solely by online shipping times may not be the most appropriate way to gauge availability. Now, calling 100 Apple Stores every night to see what's in stock sure sounds like a more comprehensive data set. That's exactly what Piper Jaffray's Gene Munster has his team do, and they track availability by the three domestic carriers: AT&T (NYSE:T), Verizon (NYSE:VZ), and Sprint Nextel (NYSE:S). Keep in mind that there are only about 250 Apple stores in the U.S., so calling 100 of them is a fairly representative sample.

This week, more than 20% of the stores polled have iPhone 5 units available for all three carriers. They found that 54% of stores had AT&T phones, 24% had some for Big Red's network, and 84% had Sprint models in stock. That's a big improvement over the past couple of weeks, when less than 10% of stores had iPhone 5 units in stock.

Of the carriers, AT&T's availability is easily the most important. Ma Bell remains the preferred network of choice among iPhone buyers. A whopping 77% of the smartphones it sold last quarter were iPhones, well above Verizon's 46%.

If we compare domestic carrier activation figures, AT&T activates half of all the iPhones among the three. 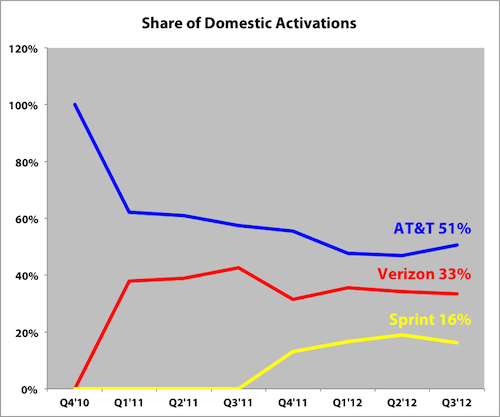 Told you so
AT&T CFO John Stephens also recently said that this quarter has seen supply improve and the situation is only going to get better from here. That also echoes Tim Cook's sentiments on the most recent conference call, when asked about iPhone 5 supply:

I'm actually not projecting whether supply and demand will balance for the quarter, I'm saying that I feel great about where we are on the manufacturing ramp that our supply output is significantly higher than it was earlier in October, and I'm confident that we'll be able to supply quite a few during the quarter, but in terms of where that, when that balance occurs, I can't tell at this point.

That was two weeks ago, and Munster's survey implies that production has ramped up significantly since then. Remember when I said that recent fears are "entirely short-term in nature?"