Every investor can appreciate a stock that consistently beats the Street without getting ahead of its fundamentals and risking a meltdown. The best stocks offer sustainable market-beating gains, with improving financial metrics that support strong price growth. Let's take a look at what Aflac's (NYSE:AFL) recent results tell us about its potential for future gains.

What the numbers tell you
The graphs you're about to see tell Aflac's story, and we'll be grading the quality of that story in several ways.

Growth is important on both top and bottom lines, and an improving profit margin is a great sign that a company's become more efficient over time. Since profits may not always be reported at a steady rate, we'll also look at how much Aflac's free cash flow has grown in comparison to its net income.

A company that generates more earnings per share over time, regardless of the number of shares outstanding, is heading in the right direction. If Aflac's share price has kept pace with its earnings growth, that's another good sign that its stock can move higher.

Is Aflac managing its resources well? A company's return on equity should be improving, and its debt to equity ratio declining, if it's to earn our approval.

Healthy dividends are always welcome, so we'll also make sure that Aflac's dividend payouts are increasing, but at a level that can be sustained by its free cash flow.

By the numbers
Now, let's take a look at Aflac's key statistics: 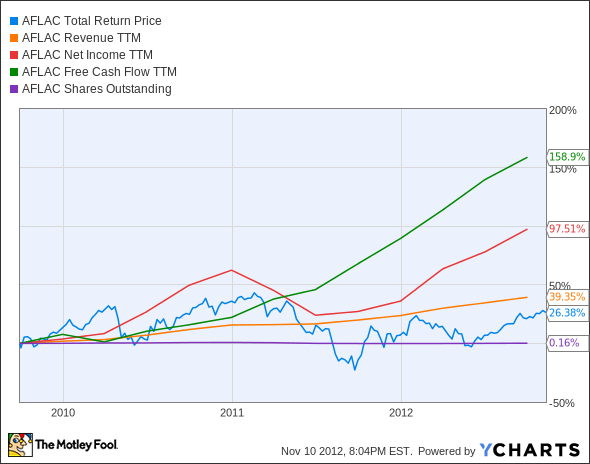 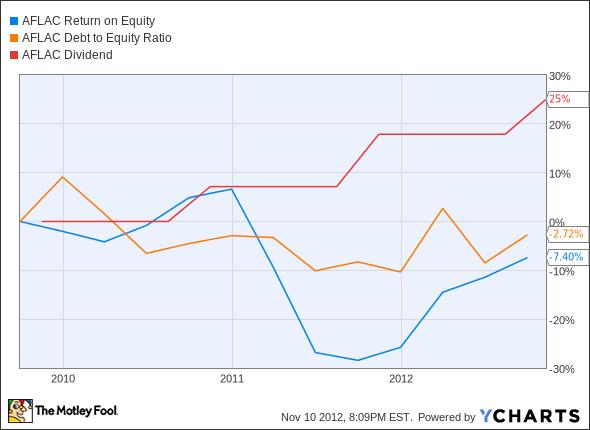 How we got here and where we're going
Aflac turns in one of the more impressive performances in recent memory, earning eight out of a possible nine passing grades. Aflac's only miss is its failure to improve its return on equity over the past three years, but this insurer has historically stood head and shoulders above its peers on this metric. Fellow insurer MetLife (NYSE:MET), by comparison, sports a return on equity ratio that's less than a quarter of Aflac's ratio today. Can Aflac maintain its strong position going forward?

Aflac is a good stock for investors looking for international exposure, as its primary focus is supplemental medical coverage in Japan. That has advantages and disadvantages, particularly in the wake of President Obama's reelection, which has depressed the stocks of larger medical insurers with a broader focus, particularly UnitedHealth (NYSE:UNH) and WellPoint (NYSE:ANTM). The American health-insurance market is bound to undergo a shift as Obamacare comes into force, but Aflac's Japanese focus offers insulation from these problems.

On the other hand, a Japanese focus can have drawbacks, as investors found out when the island nation was rocked by a monstrous earthquake early last year. The earthquake could have long-term consequences if significant numbers of insured Japanese are stricken with cancer from the leaking Fukushima nuclear plant. These concerns tanked Aflac's shares shortly after the earthquake, but the recovery was swift. However, cancer is rarely swift, and cases may be cropping up for years afterwards if the leaks were severe enough. Aflac's float investments also have some degree of risk, as the company has historically owned a fair amount of European sovereign debt. Management's efforts to reduce exposure to both risky Japanese policyholders and risky European assets will be important to its continued momentum.

One thing many investors seek from Aflac is a stable dividend, and as you can see from the data above, Aflac's got more than enough wiggle room to increase its steadily growing dividend. For three decades, Aflac's boosted its dividend payout each year. That trend continues in 2012, as Aflac announced a dividend raise of 6.1%, to $0.35 per share, in its latest quarterly earnings report. Its current yield places it in the upper echelon of health insurers, easily besting UnitedHealth and WellPoint, not to mention virtually all other insurers you can invest in today.

Putting the pieces together
Today, Aflac has many of the qualities that make up a great stock, but no stock is truly perfect. Digging deeper can help you uncover the answers you need to make a great buy -- or to stay away from a stock that's going nowhere.