I'm not a fan of carrier subsidies. They artificially deflate a consumer's value perception of what smart devices should be worth, which creates a hindrance to innovation as carriers stand between a device manufacturer and the consumer. The one saving grace of subsidies is that they do promote adoption by lowering upfront costs, but they do so by locking consumers in.

The wireless carriers have successfully built a subsidy fort around smartphones, one that virtually no one can dismantle now. Apple (NASDAQ:AAPL) tried in 2007 with the original iPhone and failed. Google (NASDAQ:GOOGL) is trying now as we speak with its Nexus program, and its fate remains to be seen.

The tablet market is playing out differently than the smartphone market, though, in part because the device categories have drastically different use cases. Smartphones live in our pockets and purses, a connected lifeline to cyberspace. Tablets, on the other hand, frequently reside on our coffee tables or nightstands, well within the range and comfort of a home Wi-Fi network.

AT&T (NYSE:T) is now offering a subsidy on the iPad, the first time a wireless carrier has ever subsidized Apple's flagship tablet. We're talking about a $100 discount for any buyer willing to sign on the dotted line for a standard two-year service contract for cellular data. 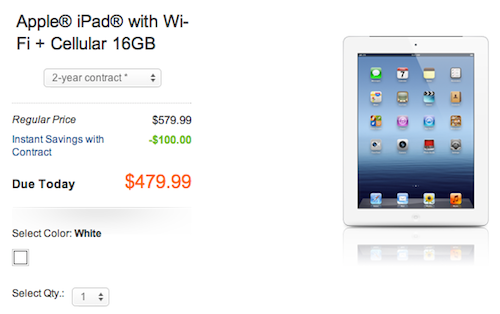 Standalone data plans start at $15, so any fourth-grade math student can tell you that will put you back at least $360 over the course of two years. That's well worth it for Ma Bell -- but not so much for you.

The same could be true about smartphones, but carriers pay far more in smartphone subsidies because they can generate more revenue through voice and SMS text plans in addition to data.

Consumers don't typically need a constant connection to their tablets. That's why signing a two-year contract makes little to no sense for the average buyer. The move is even more surprising when you remember that both AT&T and Verizon (NYSE:VZ) ditched tablet subsidies just months ago. Big Red called it quits on them in July and Ma Bell followed suit on August. Both carriers tried their luck subsidizing Android tablets.

The current offer is being framed as a promotion to clear out inventory of third-generation models ahead of the holiday shopping season, so it doesn't seem to be a broader strategic initiative for AT&T to try to reinsert itself between OEMs and consumers.