Want to know what has the potential of becoming one of the most important trends of the next decade or two? Read the International Energy Agency's new World Energy Outlook. It explains:

An energy renaissance in the United States is redrawing the global energy map, with implications for energy markets and trade. The United States, which currently imports around 20% of its total energy needs, becomes all but self‐sufficient in net terms by 2035 thanks to rising production of oil, shale gas and bioenergy, and improved fuel efficiency in transport. Falling US oil imports mean that North America becomes a net oil exporter by around 2030. This accelerates the ongoing shift in the international oil trade toward Asian markets, putting greater focus on the security of strategic routes that link them to the Middle East ...

The United States is projected to become the largest global oil producer before 2020, exceeding Saudi Arabia until the mid‐2020s. At the same time, new fuel‐efficiency measures in transport begin to curb US oil demand. The result is a continued fall in US oil imports, to the extent that North America becomes a net oil exporter around 2030. This accelerates the switch in direction of international oil trade toward Asia, putting a focus on the security of the strategic routes that bring Middle East oil to Asian markets. The United States, which currently imports around 20% of its total energy needs, becomes all but self‐sufficient in net terms by 2035 – a dramatic reversal of the trend seen in most other energy‐importing countries

If these projections are even half right, it will be an incredible boon for the U.S. economy. It will mean more jobs, less dependence on countries that don't like us, a much lower trade deficit, and smaller budget deficits. It will not only benefit oil giants like ExxonMobil (NYSE:XOM) and Chevron (NYSE:CVX), but dozens of small oil and gas explorers.

This isn't just a forecast, mind you. Energy production is already surging. We're now a net exporter of fuel products like gasoline and diesel for the time since the end of World War II: 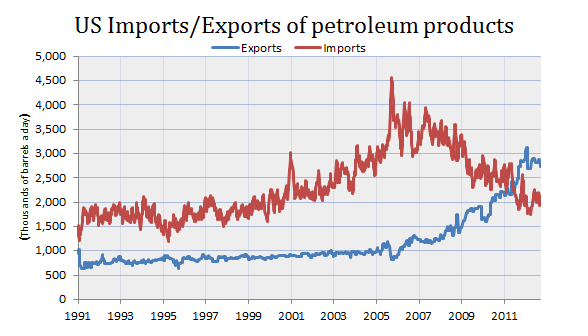 Don't underestimate how transformational this could be, folks.