I figured that Google's (NASDAQ:GOOGL) new Nexus 4 flagship Android device was domestically doomed, primarily due to its lack of 4G LTE connectivity, a key feature for all high-end smartphones sold in the U.S. in this day and age. I'm eating my words with a fork and knife today, though, as the Nexus 4 has just gone on sale in Google Play -- and promptly sold out. 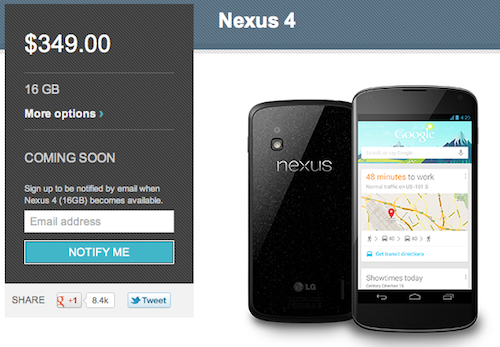 We're talking about both the 8 GB ($299) and 16 GB ($349) models being cleared out, two good signs that the lack of LTE isn't holding back demand as I suspected it might.

Google to carriers: Get out the way

Wireless carriers have spent billions upon billions of dollars rolling out their 4G LTE networks, banking on the hope that LTE would boost data usage and revenue. They'd rather sell an LTE device anyway. But then again, the whole point of the Nexus 4 is to cut carriers out of the loop and sell the device unlocked and off contract.

The Nexus 4 only works on AT&T (NYSE:T) and T-Mobile as the two major domestic GSM networks in the U.S. (not including mobile virtual network operators that resell service through those networks). AT&T officially has nothing to do with selling the device, while T-Mobile is willing to subsidize it down to $199 on contract.

Going head-to-head with the best
The sales through Google Play are for unsubsidized, off-contract phones. This makes the launch particularly impressive, because consumers willing to pay $299 can get the cream of the crop when it comes to high-end subsidized devices that offer more in terms of features.

The Nexus 4 might actually have a reasonable chance of holding its own against the latest and greatest from Apple (NASDAQ:AAPL), Samsung, and Google's own Motorola subsidiary.

Venturing above the $300 price point leaves only Apple's 64 GB iPhone 5, which sells for $399 on contract. The 16 GB Nexus 4 that sells for $349 off contract is more comparable to an entry-level iPhone 5 in terms of features and is competing closely on price with Apple's mightiest iPhone 5.

Nexus 4: globetrotter extraordinaire
Outside of the U.S. where LTE infrastructure is far less developed, I was quite bullish on the Nexus 4's prospects. Demand in other parts of the world is panning out as expected, with Nexus 4 inventory in the U.K. reportedly selling out within minutes. Demand is so robust in some countries that LG is actually shifting supply away from less important ones like the Netherlands and Belgium in order to meet demand in more important ones like the U.K. and Germany, among others.

The device's popularity abroad makes sense, and is specifically was Google was looking for anyway. The Nexus 4 was never primarily targeted at the U.S. market, instead it was tasked with appealing to as many people internationally as possible, and in that sense, the Nexus 4 is off to a very strong start.

A numbers game
Google doesn't report device shipments, so investors won't know exactly how many units we're talking about. Microsoft (NASDAQ:MSFT) Surface also appeared to have healthy signs of demand when pre-orders for its new tablet also sold out quickly, only to have Steve Ballmer concede that Surface unit sales were "modest." That disappointed investors and led to some weakness in Microsoft shares that day.

Lacking official figures, investors will have to turn to third-party estimates to get an idea of how well the device actually sells. For example, it's safe to say that Asus' sequential increase of over 1.5 million tablets in the third quarter was primarily driven by the Nexus 7.

If LG sees a big bump in fourth-quarter smartphone shipments, we can similarly infer the same about the Nexus 4. LG was previously a relatively mid-range player in terms of smartphone unit volumes (7 million in the third quarter), but its participation in the Nexus program will give it (and Google) a boost.