OLED expert Universal Display (NASDAQ:OLED) hasn't been kind to its shareholders lately. Share prices have plunged 25% since the company reported disappointing third-quarter results, and the stock is down 58% from the 52-week highs of $55 per share.

The company's board of directors saw these negative price trends and decided it was time to take advantage of the soft market. Universal Display just announced a $50 million share buyback program, which at current prices would take about 5% of its shares off the market.

"This stock repurchase program demonstrates the confidence that our board and management team have in the prospects and growth potential of the company," said CEO Steve Abramson. The buybacks will be funded from Universal's working capital reserves.

And that's where I raise a skeptical eyebrow. As a Universal shareholder myself, I'd prefer that the company would hold off on buybacks until it can afford to do it with free cash flow money. And that's not the case at all: 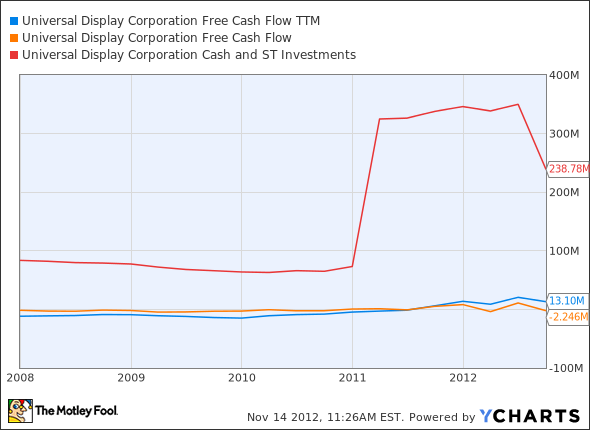 Positive cash flows are a pretty new experience for this small cap. You see that generous cash balance, from which management intends to fund the buyback? Yeah, that's what remains of the $250 million secondary offering the company did in 2010. The buyback isn't so much about rewarding shareholders, but more like a paying down bits of a very large loan.

You could, of course, take the program at face value. What if Abramson and company see $50 million of free cash coming in over the next year or so? That would be a drastic jump from the current $13 million run rate. In that case, share prices will surely soar as the fresh cash is unveilled -- making later buybacks a pretty inefficient alternative.

But nobody is promising anything here. And maybe you missed this, but company leaders actually waste more shareholder value than they create in the average buyback.

Fellow Fool Morgan Housel pointed out that even financial masters like JPMorgan Chase (NYSE:JPM) tend to roast their capital in the open market. Closer to home for yours truly, Netflix (NASDAQ:NFLX) famously bought back a ton of shares at high prices only to sell them back again at a much lower valuation. This is the polar opposite of "buy low, sell high."

Will Universal Display bungle this buyback, too? Only time will tell. I agree that the stock looks cheap nowadays, but the company could certainly find better ways to put its cash to work.