Every investor can appreciate a stock that consistently beats the Street without getting ahead of its fundamentals and risking a meltdown. The best stocks offer sustainable market-beating gains, with improving financial metrics that support strong price growth. Let's take a look at what Symantec's (NLOK -0.20%) recent results tell us about its potential for future gains.

What the numbers tell you
The graphs you're about to see tell Symantec's story, and we'll be grading the quality of that story in several ways.

Growth is important on both top and bottom lines, and an improving profit margin is a great sign that a company's become more efficient over time. Since profits may not always reported at a steady rate, we'll also look at how much Symantec's free cash flow has grown in comparison to its net income.

A company that generates more earnings per share over time, regardless of the number of shares outstanding, is heading in the right direction. If Symantec's share price has kept pace with its earnings growth, that's another good sign that its stock can move higher.

Is Symantec managing its resources well? A company's return on equity should be improving, and its debt to equity ratio declining, if it's to earn our approval.

By the numbers
Now, let's take a look at Symantec's key statistics: 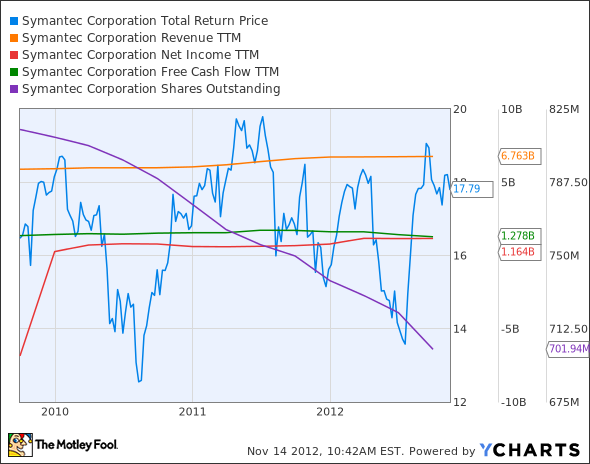 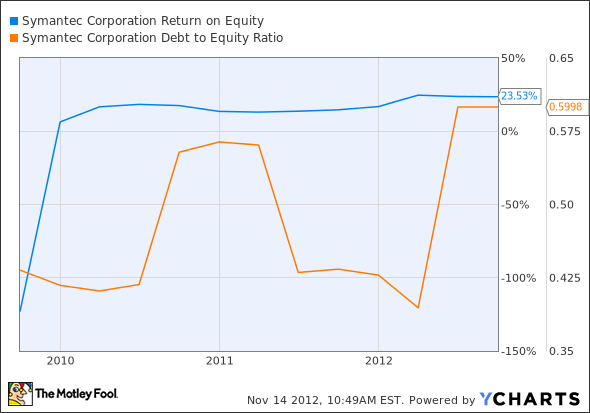 How we got here and where we're going
Symantec's results are decent, but hardly impressive. The reason for its outstanding bottom-line growth is primarily huge tax-based losses taken in response to the financial crisis. On a free cash flow basis, Symantec's actually doing a little worse than it was toward the end of 2009. One major thing has changed at Symantec, though -- its leadership. Can a new CEO turn Symantec around?

It wasn't long after sliding to a 52-week low that Symantec's year turned around in a big way. New CEO Steve Bennett's arrival gave Symantec's stock a $1.5 billion boost, and it's stayed at higher levels ever since. A Foolish commenter in the above-linked article had nothing but kind words to say about Bennett's tenure at Intuit (INTU 8.21%). In seven years as Intuit's CEO, Bennett oversaw its growth from a post-dot-com-crash market cap of $6.8 billion to a 2007 year-end market cap of $10.5 billion. Along the way, Intuit went from being free-cash-flow negative with annualized revenue of just under $1 billion to a much stronger company with $2.8 billion in revenue and $560 million in annual free cash flow. If the bar was set high for Bennett's stewardship of Symantec, it's Bennett himself who set it.

Microsoft made impressive North American gains over the past six months, and also improved its global share, while Symantec was flat in North America and lost ground globally. That has to change to produce the bottom-line results investors are looking for from Bennett. The only silver lining is that Symantec's avoiding the declines that hit both recent IPO AVG (NYSE: AVG) and Intel (NASDAQ: INTC) subsidiary McAfee in the North American market. Both lost approximately 2% of their share in the past six months, much of which seems to have gone to Microsoft.

Symantec's got the benefit of operating in an essential industry, but it's in network security that Symantec will find its greatest opportunity. Providing network-focused security services for businesses was Symantec's only source of strength in its most recent quarter, as both its consumer-focused segment and its storage and server management segments saw year-over-year declines.

Putting the pieces together
Today, Symantec has some of the qualities that make up a great stock, but no stock is truly perfect. Digging deeper can help you uncover the answers you need to make a great buy -- or to stay away from a stock that's going nowhere.