Initial jobless claims for the week ending Nov. 10 jumped to 439,000 a 22% increase over the previous week's 361,000 revised figure. This follows three consecutive weeks of single-digit decreases. 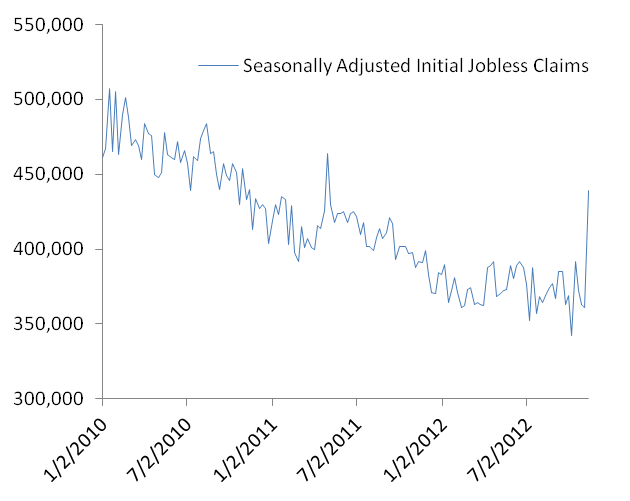 Information from the Department of Labor showed three states reporting an effect from Superstorm Sandy. In New York, power outages contributed to a decrease in claims as state systems were unable to take claims. New York's number decreased 2,241. Connecticut and New Jersey reported increases in initial claims due to Hurricane Sandy. In New Jersey, the "separations" were primarily in the construction, accommodation and food service, transportation and warehousing, and manufacturing industries. New Jersey's total increase was 5,675, while Connecticut clocked an increase of 1,783.

Although this week's data may be distorted due to the effects of Hurricane Sandy, its 400,000+ number puts claims solidly above what economists look for as a sign of an improving labor market. Initial jobless claims this high have not been recorded since the week ending April 30, 2011.

The advance seasonally adjusted insured employment rate was 2.6% (3.33 million) for the week ending Nov. 3 (most recent available data), a 0.1-percentage-point gain over the prior week's revised rate.