There are more good news articles, commentaries, and analyst reports on the Web every week than anyone could read in a month. Here are the eight most fascinating ones I read this week.

Pulling away
This is data from the Social Security Administration. Those with higher incomes are gaining much more ground in terms of life expectancy than those of lesser means: 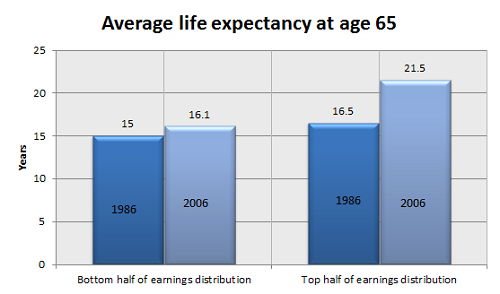 Optimism
From the BBC:

The US will overtake Saudi Arabia as the world's biggest oil producer "by around 2020", an International Energy Agency (IEA) report has said.

The IEA said the reason for this was the big growth and development in the US of extracting oil from shale rock.

This has enabled the US to gain significantly more extractable oil resources.

As a result, the IEA predicts the US will become "all but self-sufficient" in its energy needs by around 2035.

Berkshire looks appealing because the stock's price/book ratio is near the bottom of its 10-year range and just above a threshold of 1.1 times book at which Buffett has said the company stands ready to repurchase shares. Berkshire is sitting on $42 billion of cash -- $11.5 billion in the holding company and the rest in its insurance affiliates. 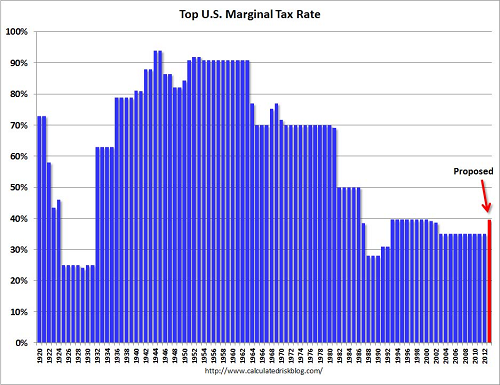 Depends on who you ask
Barry Ritholtz gives a smart explanation of people's reactions to market moves in the Dow (DJINDICES:^DJI) and S&P 500 (SNPINDEX:^GSPC):

Changes in market action send all scurrying back to the comfort of their discipline; each describes what they "see" in relationship to their school of thought:

The Fundamentalist sees the market in terms of earnings and perhaps guidance; Technicians sees trend line breaks and H&S patterns. All of the Macro guys see global economic activity, including recession in Europe and slowing in Asia. Value Investors sees stocks as relatively cheap, with moderate P/Es and dividend yields. Monetarists cannot see anything but Fed intervention and currency action. Behavioralists watch the VIX, Put/Call ratio, percentage of stocks over their 200 day moving average, among other indicia of fear and panic. Political economists cannot see past taxes and the fiscal cliff. The analysts who prefer a fusion of schools of thought runs into the possibility of information overload and false signals.

Of all places
North Dakota is becoming America's next great boom, complete with severe housing shortage:

KKR (NYSE:KKR) is expected to announce Wednesday that it will develop a sprawling master-planned community that could become a modern-day Levittown on the North Dakota plains. The project in Williston is expected to serve some of the thousands of workers pouring into the region who are searching for jobs but facing inadequate housing.

"The population is going to double or triple over the next handful of years," said Ralph Rosenberg, head of KKR's real-estate team.