We're pitting two big oil titans -- ExxonMobil (NYSE: XOM ) and BP (NYSE: BP ) -- against each other to determine which would be a better buy at today’s prices. Four of our top analysts weigh in.

Travis' take
Both BP and ExxonMobil are giant, integrated organizations with exposure to oil, natural gas, refining, and downstream products. Therefore, I think it's important to take a big picture look at the direction of these businesses and what we're paying for in these companies.

Unlike smaller exploration and production companies, BP and ExxonMobil have fairly stable earnings because of their diverse businesses. It's useful to take a look at some key statistics for each company:

Based on these statistics it looks like BP is the better value but ExxonMobil is the better operator. Neither stock is terribly expensive and investors are also getting solid dividends, but I think macro factors are just as important for investors to consider.

Over the past decade the energy industry has made a subtle transformation from consumption growth driven by low costs to efficiency improvement driven by high costs. Think about 10 years ago when SUVs were all the rage. Today, every auto commercial mentions fuel efficiency because gas is now a major expenditure for consumers. This puts pressure on BP and ExxonMobil; I don't see volume consumption expanding, I see it contracting.

The chart below shows a steep drop-off in oil consumption in the U.S. since 2006. This is partly due to the recession, but you can see that consumption hasn't picked up with the recovery because consumers are focused on using less. 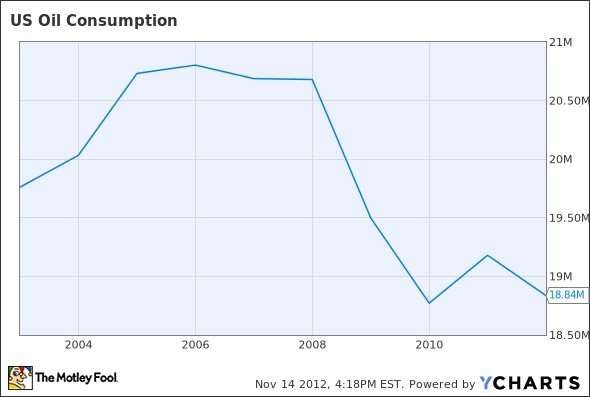 US Oil Consumption data by YCharts

When we add in new fuel efficiency standards coming into effect by 2025, there will be even more pressure on consumption, and oil companies are on the wrong side of the equation.

Natural gas consumption may make up for some of this, but the big jump in natural gas usage has been driven by low prices, which isn't profitable for BP or ExxonMobil.

Emerging markets like China, which is increasing consumption, is a counter to my argument that volumes will decline. But, I see a lot of challenges in China going forward and I wouldn't bet on continued rapid growth there.

To sum all of this up, I think BP is a better buy than ExxonMobil strictly because of valuation. But I'm not a buyer of either because I don't think volumes or prices will rise significantly in the future because of macro trends toward more efficient energy usage. I expect these stocks to be stable, income stocks, but in the energy sector I'm buying growth industries like solar and ultra-deepwater offshore drilling.

Aimee's take
Production is down at ExxonMobil year over year, but all of big oil is suffering from that reality, including BP. In a head-to-head matchup, it is hard to cast a vote against Exxon, a remarkably efficient beast, so I won't.

Which isn't to imply I love this behemoth; one of my biggest hang-ups with Exxon is that it routinely forgoes significant investment in renewable energy. I think it's short-sighted, and depending on how much I feel like moralizing the business on any given day, irresponsible. However, here I remember Exxon's biggest advantage: it can buy its way into almost any business it wants -- see U.S. natural gas and shale oil for reference. Who knows, that may include renewable energy one day.

BP is a little more forward-thinking and does have a small position in renewables, but it also has a fair bit of risk attached to it, as evidenced by the recent $4.5 billion settlement with the U.S. government over the Gulf of Mexico spill. The settlement included $1.3 billion in criminal fines, but a host of civil claims remain outstanding. After jettisoning $35 billion in assets over the last two years, it has finally returned to profitability. Investors may find that intriguing, but BP is nowhere near as fiscally fit as Exxon.

Bottom line: Oil reserves are now more difficult to find and more expensive to extract. The world's integrated majors will have to adjust their game plans in order to continue to create value for shareholders. With its big ol' bag of cash, I think Exxon is in a better position to do that right now.

Arjun's take
Beyond the fact that both are large, integrated, oil companies, BP and Exxon also share another common feature: Both were front and center in two of the biggest environmental disasters in recent history, the Exxon Valdez oil spill and the Deepwater Horizon incident – events that have drastically altered their paths.

In ExxonMobil's case, after the 1989 Exxon Valdez oil spill, the company fundamentally reshaped itself into a much more disciplined enterprise with an overarching focus on safety and risk management. Judging by its consistently solid profitability, as evidenced by a return on equity and return on capital employed that are both significantly higher than the peer median, this disciplined approach has certainly paid off.

While Exxon's size is a limitation in matching the returns enjoyed by smaller, nimbler peers, the company can continue to grow through acquisitions and through numerous, high-return projects around the world. It remains well-diversified through its upstream, downstream, and chemicals portfolio, and boasts a customer base spanning nearly every country in the world.

As for BP, it's been a long road recovering from the 2010 Deepwater Horizon disaster, the worst accidental oil spill in history. The incident has kept BP's share price depressed for much of the past two years, providing a solid opportunity for value investors.

Besides its attractiveness as a value play, BP has several other things going for it. BP boasts the highest dividend of all major oil firms with a 5.3% yield. It also managed to pull off an impressive 21.3% return on capital employed last year, just about 3% shy of ExxonMobil's 24.2%. While Chevron (NYSE: CVX) collects the greatest profit per barrel of oil, these two companies deploy their capital more efficiently.

All in all, I like both companies and think both would make solid investments. While sustained declines in oil and gas prices remain the biggest threat for both, they could also spell an attractive buying opportunity. While BP most likely has greater upside potential, I think ExxonMobil's downside is much more limited, making it a safer pick amid a remarkably uncertain macroeconomic environment.

David's take
I'm probably a little more sanguine about the members of big oil – including both ExxonMobil and BP – the latter of which I own, than are many of my peers. But, despite my position in the latter company, I'm a better buyer of Exxon.

My reason? I'm convinced that the Middle East, almost under the radar, has become more of a tinderbox than ever before. Clearly, an outbreak of hostilities of any consequence in the region would send crude prices immediately skyward, making ownership of big oil a virtual must.

But why ExxonMobil? Of course, there's the balance sheet and its technological leadership in the group. Also, I believe there will come a day when its domestic natural gas leadership will benefit it meaningfully.

But just as important is its savvy in holding its own in the increasingly rough-and-tumble world of resource nationalism. It's operated successfully in Russia, which has gotten the better of BP and Shell (NYSE: RDS-B). Further, while other majors folded, it contested Hugo Chavez's nationalization of its assets in Venezuela a few years ago. And now, with the Iraqi government having taken financial advantage of the companies laboring to reinvigorate its oil output, Exxon appears to be cutting its losses and moving on to more lucrative arrangements.

With or without its new deal with Rosneft, amid a dramatically expanding world oil scene, ExxonMobil's political savvy will stand it in awfully good stead.

To the tape
The unanimous decision goes to the defending heavyweight ExxonMobil, as the company's balance sheet superiority and deep-rooted relationships reduce this bellwether's commodity and geopolitical risks. BP still has considerable upside, especially now that it has buried the hatchet with the Department of Justice, in addition to offering a superior dividend, but its lean approach still fails to take on the likes of ExxonMobil.