There's a media storm brewing around digital radio specialist Pandora Media (P). Next week's edition of Billboard magazine will feature a two-page ad slamming Pandora's efforts to change music royalty rates. The ad was signed by about 120 music acts, ranging from old-school classics such as The Temptations and The Four Seasons to modern hitmakers like Katy Perry and Maroon 5. Some people seem to really hate Pandora's proposal: Darius Rucker of Hootie and the Blowfish fame signed both with the band and as a solo act; so did Pink Floyd legend Dave Gilmour.

The rhetoric certainly sounds inflamed. "Pandora's principal asset is the music," the ad says. So, "why is the company asking Congress once again to step in and gut the royalties that thousands of musicians rely upon? That's not fair and that's not how partners work together." 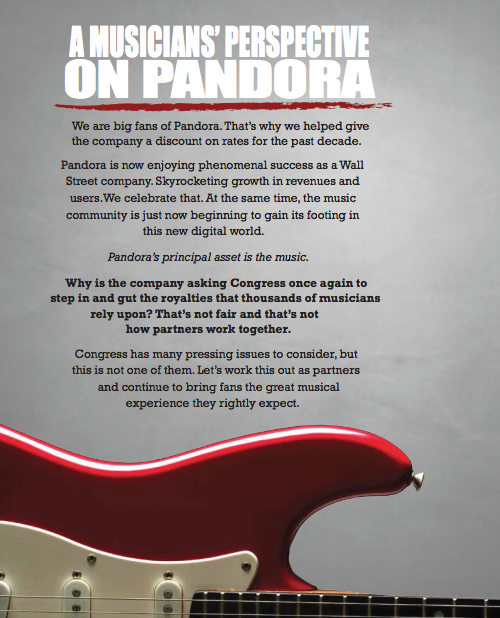 The argument against Pandora's proposed changes.

The roll call of musicians behind the complaint. Source: Business Insider.

With so many famous acts rebelling against Pandora's plans, the company must be doomed.

Except, this really isn't news at all.

But everybody's talking!
The ad was jointly placed by royalty collector SoundExchange and the musicFirst activist coalition. What does that lobbying group promote? A competing slate of royalty reform that has been working its way through the House and Senate over the last five years. Get right down to brass tacks, and this isn't a story of starving artists versus greedy Pandora at all -- just a matter of clashing reform bills.

The musicFirst bill aims to level the playing field between large and small terrestrial radio stations. The Pandora-backed bill wants to do the same across digital and analog media. The musicFirst petition would probably benefit Pandora,too, given a couple of amendments to get it up to Internet speed. But right now, they are simply two different ideologies, and both can't score a total victory. Hence, the fisticuffs.

It's pretty obvious that Pandora won't survive without some congressional action -- be it the company-approved IRFA bill or the competing PRA proposal. musicFirst decries Pandora's "skyrocketing growth in revenues and users," which is fair enough, but the current royalty framework makes Internet radio a cash-burning business model anyway.

What's the problem?
Landlocked radio stations pay music royalties as a modest percentage of the station's advertising revenue. Satellite radio giant Sirius XM Radio (SIRI -1.04%) pays a flat royalty per user account, which works out to about 10% of the company's gross revenue. Pandora and other Internet-only services? The pay a seemingly small fee per performance, not tied to top-line revenue like the other guys.

It's not a blanket rate for broadcasting your song to a ton of listeners, but a piecemeal fee per listener and per song. One listener dials up the same song 100 times? Multiply the royalty by 100. 100 listeners listen just once? Again, 100 times the payment. This adds up really quickly, and punishes the company for becoming more popular. "Pandora paid over 50% of revenues in performance royalties, while SiriusXM paid less than 10%," according to Pandora founder Tim Westergren.

The National Association of Broadcasters comes down on Pandora's side of the fence, having opposed the PRA act and voiced support for IRFA. It's always nice to have some industry support, but nothing is ever certain in Washington.

Either bill could move forward in the very near future as lawmakers like exploiting lame duck sessions to push through controversial law changes. Pandora investors need to keep an eye on CSPAN until the newly elected Congress starts up next year.

I'd be scared to touch Pandora with a 6-foot pole until this conflict is resolved. You can't stop progress, and I'd hate to see Pandora pave the way for future innovators by laying down its own corporate corpse. Until further notice, that's still a very real possibility.