Reporting disappointing earnings for the third quarter of 2012, fashion retailer Limited Brands (NYSE:BBWI) issued a much more positive outlook for the next quarter and the full fiscal year. Exceeding the estimates of the analyst community, Limited Brands is starting the holiday season off right for its shareholders.

Because Limited piled discounts into its third quarter -- most likely to clear out merchandise before the holidays -- revenues were down to $2.05 billion, equaling Wall Street estimates. For the third quarter of 2011, $2.17 billion was booked as revenue. Comparable store sales still rose by 5%, year over year, despite the decline in revenues.

Third-quarter revenue slumps seem traditional for Limited. As the chart below shows, its revenue typically rebounds strongly in each year's fourth quarter: 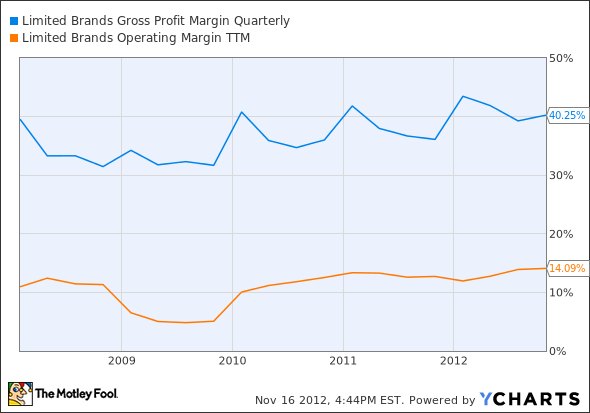 Even before its more optimistic outlook, Limited Brand had a much better price-to-earnings ratio and five-year earnings-per-share growth rate than the industry average and competitors such as American Eagle (NYSE:AEO), Urban Outfitters (URBN), The Gap (GPS) and Abercrombie & Fitch (NYSE:ANF). Its dividend yield tops the industry average and most of its rivals, too.

With 40 new stores in business, promotions winding down, and the traditionally strong holiday shopping season approaching, shareholders of the Limited Brand should soon be opening a higher stock price with a 2.17% dividend wrapped around it!