Caroline Bennett
(TMFCarrieFab)
Author Bio
Caroline wants to help make the seemingly esoteric concept of investing accessible to everyone... and write a few puns along the way.

The stock market has a lot in common with the world of fashion. You're either in, as Heidi Klum says, or you're out. Fads may come and go, but one thing's for certain: the savvy investor is always in season. Here are solid high-end clothing and accessory stocks (as well as the retail juggernaut they call home) that can bring a pop of style to your portfolio.

Coach
A staple among solid fashion companies, Coach (NYSE:TPR) has delighted shareholders by growing its EPS from $1.93 to $3.60 within the past three years. Coach also provides a $0.30 dividend per quarter, and the company's 33% payout ratio suggests Coach has plenty of room to raise this in the future.

While it has 990 stores across the U.S., Coach has broadened its business reach to Japan, Hong Kong, Macau, and mainland China, with plans to set its real estate sights even higher in the future. Coach also has solid margins in a hugely unstable industry, which should bring peace of mind to its investors.

Movado
Every good outfit needs a great accessory, and watch designer Movado (NYSE:MOV) can be as useful to your stock collection as it is to your wrist. This company's financials are on the rebound from the previous two years. Net income is up by almost $70 million from last year, taking its margin from negative 12% to 6%. Additionally, its gross profit margin has increased from 47% to 54%, and operating margin is up to 7% from negative 3%. Its margins may seem small for now, but the company paid off $9.6 million of long-term debt last year. Now that its burdens have lessened, there seems to be no reason the company's stock won't continue to rise.

Michael Kors
Modern classic Michael Kors Holdings (NYSE:CPRI) has seen its stock price nearly double since it went public last December -- and with good reason, judging by its financials. Revenue has shot up like a rocket, going from $508 million to $1 billion in just two years. Its margins also appear solid. 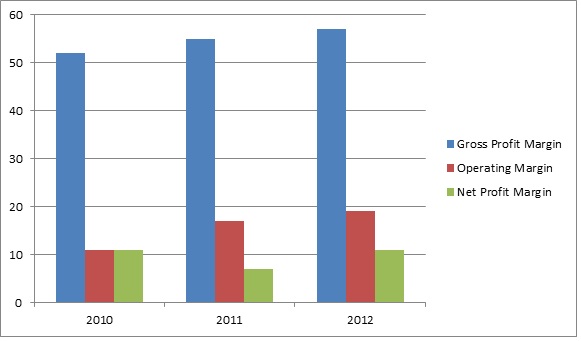 Kors' margin for net income has stayed positive, and its gross and operating profits are on the rise, from 11% to 19% and 52% to 57%, respectively. It seems the company's business savvy is just as strong as its aesthetic sense.

And while you're at it, invest in the store that sells them
These three brands are solid businesses on their own, but investing in a store that houses all their products is a great way to add a little extra oomph to your portfolio. Macy's (NYSE:M) has been strengthening its financials over the past few years. From 2010 to 2012, its revenue has jumped from $23 billion to $26 billion, while all margins either stayed consistent or rose steadily.

Macy's has also proven itself fiscally responsible by reducing its long-term debt by almost $2 million from 2010 to 2012. If it can stay this strong in the face of a recession, as well as amid the constant volatility of retail, there is no reason it can't continue to succeed for years to come.

Stylish bottom line
Even in an industry known for fickle trends, some companies are classics. Taking a risk in the stock market can have its rewards, but so can choosing businesses that have a proven track record. Movado, Coach, and Kors are three brands with strong financial common sense, and each can be found at Macy's, itself a sturdy pick for the Wall Street fashionista. However, if you have to pick just one fashion brand for your portfolio, go with Coach's potentially undervalued P/E of 15, instead of Movado's 24 and Kors' enormous 68. Meanwhile, with a P/E of 12.27, Macy's is far from overvalued, in an industry that averages 19. Its solid financials suggest that now could be a great time for investors to pay a visit to this retail house.