When it comes to investing, knowing when to buy, sell, or hold a stock can mean the difference between making money and losing it in the market. While this may seem straightforward, making the best decisions for your investments can be challenging. Fortunately, investors can minimize risk by weighing both the pros and cons of a given stock before deciding how to act. Today, we'll investigate Marvell Technology (NASDAQ:MRVL) and evaluate whether investors should buy, sell, or hold this tech stock.

On a valuation basis, shares of Marvell Technology look rather cheap. The stock currently trades around $7.40 a pop, with a P/E multiple of just nine times earnings. As you can see from the chart below that's markedly below industry peers. 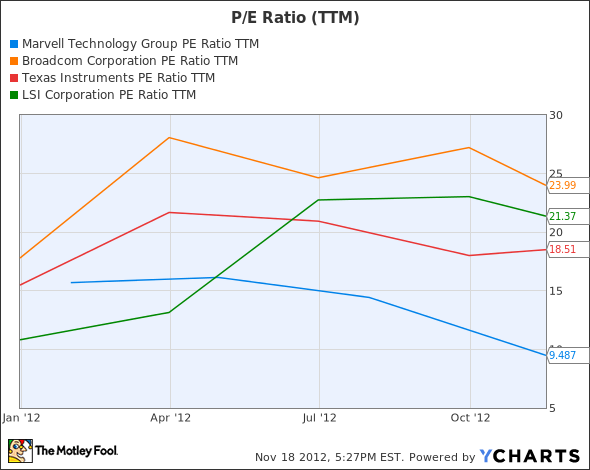 The company's cash hoard is also a positive for the stock. As my fellow Fool Evan Niu points out, "The company had $2.1 billion in cash and investments on the books at the end of July." He goes on to argue that Marvell is a value play today at its current valuation.

Marvell remains a dominant player in the hard disk drive market, though soft PC sales have taken a toll on chip makers lately. Fortunately, the company's mobile and Wi-Fi chips have been gaining momentum. As a result, this has helped Marvell make up for lost revenue in the HDD space.

Most recently, Marvell's chips won a spot in Microsoft's (NASDAQ:MSFT) new Surface tablet. This could add meaningful upside to shares of Marvell and other suppliers if Microsoft's device is able to win over consumers in a big way. Besides, Marvell's processors are already in a number of other popular consumer tech products like Microsoft's Xbox Kinect.

Sell
Slowing demand for PCs is crippling Marvell Technology. Profit declined 64% for the company's third quarter to $69 million, down from $192 million in the year-ago period. Of course, Marvell wasn't the only chip maker to post disappointing earnings recently.

Last month, industry rival LSI (NYSE: LSI) also reported quarterly results that came in below analysts' estimates for the company's third quarter. LSI's revenue for the period was $624 million, compared to expectations for $638 million, according to FactSet. Both LSI and Marvell continue to run into headwinds related to slowing demand from key markets, such as PC sales.

But weak earnings are just the beginning of Marvell's worries. Embattled handset maker Research In Motion (NYSE:BB) is also dragging the company down. As one of Marvell's biggest mobile processor clients, the BlackBerry maker's diminishing handset sales have put a dent in Marvell's profits.

With the odds stacked firmly against RIM and PC sales in the pits, shares of Marvell seem to be getting riskier by the day. Not to mention Marvell's stock has lost more than 50% of its value in the last year. Meanwhile, increased competition from tech giant Qualcomm (NASDAQ:QCOM) is eating into Marvell's first-mover advantage in China.

Marvell was once the leader in sales of processors built for the Chinese 3G technology known as TD-SCDMA. However, Qualcomm has been stealing market share from Marvell in the space recently -- this doesn't bode well for Marvell bulls that are hoping for meaningful growth in this market.

Hold
But it's not all bad news. Marvell Technology's attractive 3.2% dividend yield, on the other hand, offers investors a compelling reason to ride out the storm. The company is also creating shareholder value by buying back shares at currently low multiples.

Moreover, the Fool community appears confident in the company -- giving the stock a four-star rating (out of five) on Motley Fool CAPS. For those who prefer Wall Street's opinion: The average recommendation for Marvell Technology is hold, with an average price target of $10.08 per share, according to S&P Capital IQ.

Final answer
Now that we've laid out the pros and cons to owning shares of Marvell Technology, I suspect the outcome has piqued the attention of value investors. With shares trading well below the $10 mark, I think the stock is a buy today.

However, that's not to say that the company doesn't face significant challenges in the quarters to come. Stalling PC sales, trouble in the handset industry, and the arrival of larger opponents with competing mobile chips all weigh heavily on Marvell's future success. But if you're looking for value, at today's price, Marvell Technology is the stock to own.