Home construction is on the rise. The Department of Housing and Urban Development reported today (link opens in PDF) that housing starts jumped to a seasonally adjusted annual rate of 894,000 for October, a 3.6% gain over September's 863,000, and 42% above October 2011's 630,000 starts.

On a regional basis, housing starts in the West accounted for the largest gain (17.2%), while Superstorm Sandy may have been partially responsible for the Northeast's 6.5% decline. Federal officials said overall that Sandy's impact was "minimal" because the storm affected construction activity in a small part of the country for only the last few days of the month and did not affect their ability to collect data. 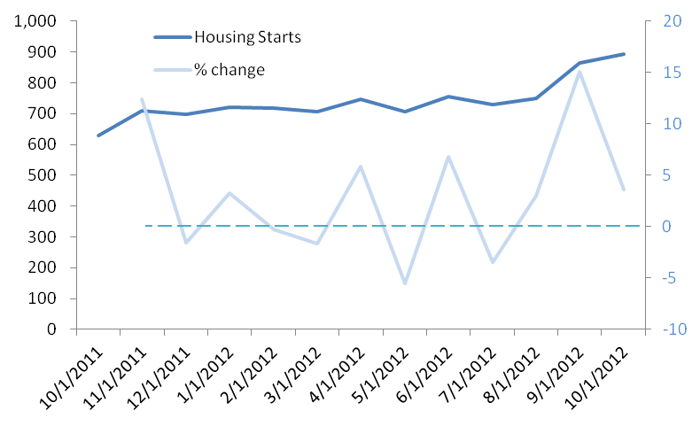 Following news this week of rising home sales and more confident homebuilders, this report serves as another potential sign of a recovering housing market.

A less-than-certain future is, however, reflected in a slight slump in building permits. Permits fell to a seasonally adjusted annual rate of 866,000 in October, 2.7% below September's 890,000 revised number. Compared to last year, October 2012's permits still amount to a nearly 30% increase.