To spell it out for Cupertinistas, no mas smartphone subsidies means the priciest handsets are no longer affordable for the less-than-well-off in Spain. The 16 GB iPhone 5 retails for $870 there when bought without a long-term contract.

Note the huge drop in iPhone sales for Spain: 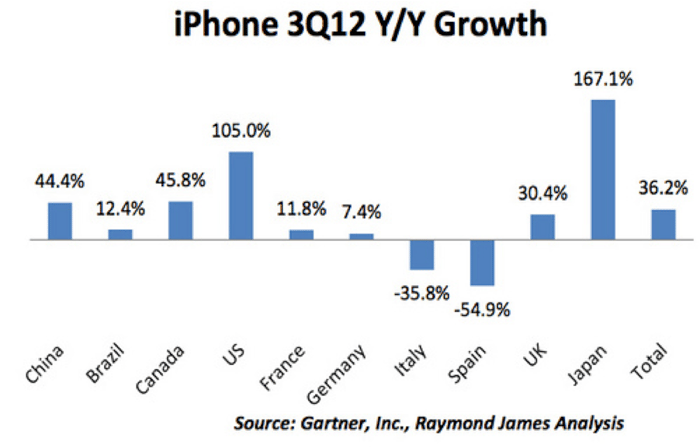 Though ditching subsidies has lifted profit margins for Telefonica, it has also meant losing subscribers -- 254,000 in September. However, the carrier is continuing with its no-subsidy policy.

Vodafone's (NASDAQ:VOD) Spanish mobile operation also decided to forego subsidies, but after losing 178,000 customers in September, unlike Telefonica, it's going back to subsidizing handsets.

What Samsung has that Apple doesn't when it comes to selling its smartphones in economically hard-hit areas is a hierarchy of smartphone models. Apple can't compete with Samsung in the lower price ranges because it has no low-priced handsets. Other than older used iPhones sold on Craigslist or Ebay, cheaper iPhones are just not available.

The latest Gartner report has the Android's third-quarter market share at 72.4%, an increase of over 20 percentage points over the same quarter last year.

Apple's iOS third quarter market share is 13.9%, a decrease from 15% in the same quarter last year.

If the grand experiment in making customers pay full price for handsets works out for Telefonica, it could turn out to be the canary in a coalmine for Apple's pricing of the iPhone. Mobile operators around the world are looking for ways to cut their costs, and getting rid of phone subsidies is certainly an attractive option.